The Butcher of Cidaris
In Cervisia Veritas

Leave the camp and go to the southwest where the red tents are. Talk to Madame Carole, ask for a prostitute, and give her a square coin (obtained upon completion of the quest The Butcher of Cidaris or In Cervisia Veritas, or by examining the items around the circle at the site of Sabrina Glevissig's execution during Lost Lambs). Ask specifically for Whistling Wendy. When Whistling Wendy asks what you would like, choose "open the gates of paradise with her smile."

Whistling Wendy will walk to her room and open a trap door. Jump down and get ready for a fight. Traut will have a short conversation with you, but you will enter battle with him and few of his allies. Kill them all and take everything - among the loot you will find Seltkirk's armor which enables the quest Courage Symbolized to be completed.

Follow the map arrow and talk to Dandelion about his role creating the anti-Henselt pamphlet. Then talk to Dethmold. At this point, the quest will come to a standstill, and it cannot be advanced until the Draug has been defeated in The Eternal Battle.

Upon awaking in the Kaedweni brothel, Dandelion tells you he overhead someone in the conspiracy was going to a meeting at the hut on the cliff, and that Dethmold has arrested multiple people suspected of being involved in the conspiracy. Upon traveling to the hut, Geralt finds a meeting with Vernon Roche and three Kaedweni nobles. Tensions in the meeting were high before Geralt's arrival, and when the Witcher reveals the names of those arrested, the conspirators realize their scheme is over and they disperse. Roche, however, realizes his men are in danger, and urges Geralt to rush with him back to their camp.

In the Blue Stripes' Camp, several Kaedweni soldiers are waiting for you and Roche, and they attack on sight. Upon defeating them, a prostitute appears, revealing that the Blue Stripes were invited into the camp for a feast. Inside the palisades, Roche and Geralt are again attacked by Kaedwenis. Upon defeating them, enter the camp's canteen. There, the Blue Stripes hang from the rafters. Ves is still alive, crying in the corner. She recounts the betrayal, after which Geralt urges Roche to avoid sacrificing his life in anger.

Do you want o hear how the witcher got embroiled into a high level conspiracy? Well, our hero was summoned before Dethmold - a bad beginning making a worse ending.
The sorcerer was aware that the witcher is interested in the curse placed on the battlefield, and pointed him to a clue. So it was that several soldiers hatched a plot apparently connected to the curse. Dethmold did not know what was the conspiracy's aim and who belonged to it. After getting this, oh how precise, clue, Geralt decided to nose around the camp.
How does one recognize a conspiracy? When you get a square coin, are told to go to the brothel, ask for Whistling Wendy and tell her to open the gates of paradise with her smile - then, beyond any doubt, you are dealing with a conspiracy.
If Geralt talks to Dethmold about finding conspirator's hideout, he will give you 4 soldiers to help:
Geralt met with Dethmold and told him about the investigation's progress. The sorcerer gave him his best soldiers as backup, and told him to dig deeper.
If Geralt asks Roche for help:
The witcher spoke to Vernon about the conspiracy, but Roche turned out to be unwelcome in Henselt's camp, and his every move was being keenly watched. In this, and every other case, his hands were tied.
Geralt didn't have a chance to chat with the conspirators. He had barely entered the basement where they were hiding when they lunged at him, swords in hand, believing him a spy of Henselt's Geralt killed them al in self defense, though not without satisfaction, as he was sore. When he did the deed, he sheathed his sword, looked about in search of trails connected to his investigation and then went to give Dethmold a report of his actions.
Oh, I almost forgot. In the plotters' hideout, Geralt found Seltkirk's chainmail, in the hands of one Traut. This brought him one step closer to lifting the curse.
At the plotters' headquarters, Geralt found a pamphlet denigrating King Henselt. I proudly admit to being its author. The witcher, however, should be ashamed, for he did not appreciate this well written lampoon and even dared reprimand me.
The witcher bombarded me with questions, but I did not have the answers he expected. The truth was prosaic, as it tends to be. Henselt had asked me to write a panegyric about His Royal Majesty, but, as a fully independent poet loyal only to the Arts, I could not accept this servile commission. Like witchers, I have my code. Instead of writing a song praising the king, I cooked up a beautiful lampoon that soon became famous among the soldiers. Geralt had found a copy of the work in question.
Learning nothing of interest from me, Geralt, admittedly dejected, decided to report his progress to Dethmold.
If Geralt refuses the bounty on the conspirators heads:
It turned out there was a reward on the conspirators heads. However, Geralt didn't accept the money, faithful to the rule that witchers do not accept contracts on humans. Ridiculed by Dethmold and still poor, he left with his pride intact. That's a witcher's lot for you.
If Geralt accepts the bounty on the conspirators heads:
It turned out there was a reward on the conspirators heads. Witchers don't usually accept contracts on humans, but since the killing was already done, Geralt took the money, reasoning that every coin was useful and Henselt would not grow poor.
'Geralt's investigation had come to a standstill. He had chatted with Dethmold and with me, but the solution to the mystery remained well beyond his reach. The witcher's discoveries had not moved things forward, a fact that soured his face. He decided to focus on other matters while waiting for new leads to appear.
Geralt defeated the draug, but nearly pad with his life for the victory. He was found unconscious and brought to the brothel in the camp followers' encampment. There, the witcher slept for three days, regaining his strength. And it was there that I found him. Seeing my friend in such a pitiful state, bruised and exhausted, I felt compassion overwhelming me. I told him what I had learned upon overhearing Whistling Wendy talking with one of the conspirators: that they would hold a meeting at the hut on the cliff. Thus I solved a mystery that had proved too difficult for the witcher's head.
You should have seen Geralt's face when he saw Vernon Roche talking to three other noble-born conspirators in the hut atop the cliff! Woe to the country whose intelligence relies on watchers! The Blue Stripes' leader's jaw dropped too, and fast, when he realized that the lives of his men were in danger. The head plotter and the man who had uncovered him rushed to the Kaedweni camp.
There a welcoming committee of Kaedweni men-at-arms awaited Geralt and Vernon. These were but a minor problem, however. A young prostitute who survived the slaughter by remaining neutral informed our heroes that Dethmold had invited the Blue Stripes to a feast in the camp's canteen.
The entire unit had been ambushed, captured and hanged. Roche had never been more furious in his life. He burned with a lust for vengeance and Geralt barely stopped him from doing something foolish. Henselt was just waiting for our heroes to make a mistake. He yearned to finish his own bloody vengeance, and was surely well prepared to do so. The only thing left to do was to save revenge for later and follow Sile de Tanserville, who had fled for Vergen. 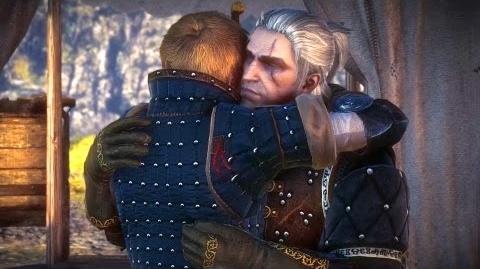