Blood and Wine expansion
Count Beledal was a rich Koviri nobleman who made a business of importing wine from Kovir while recording his excursions with a curious device that turned his pictures into paintings. Throughout his travels he was guarded over by Vilmar and another knight but when in Toussaint he specifically requested the witcher Geralt's assistance.

It was later revealed that his daughter, Clarissa, became bedridden after falling off a horse and was therefore unable to go on anymore trips. To make her feel better, Beledal then started using his device to capture scenes throughout the world to give to her every time he returned home. In particular, she was very fond of peacocks and why Beledal wanted to capture pictures of them.

After finishing up in Toussaint, he planned to travel through Dol Blathanna on the way home in hopes of getting pictures of sylvans. 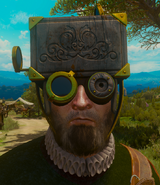 The count wearing the parestisomach device
Add a photo to this gallery
Retrieved from "https://witcher.fandom.com/wiki/Count_Beledal?oldid=509911"
Community content is available under CC-BY-SA unless otherwise noted.