"This is my story, not yours. You must let me finish telling it."
This article/section is a stub. You can help Witcher Wiki by expanding it.
Infobox Needed
This article or section needs an infobox template added.

Courage Symbolized is a quest in The Witcher 2: Assassins of Kings.

In the process of completing the quest Conspiracy Theory, Geralt was led to the basement of the old tower. There he faced Vinson Traut. After defeating him and his lackeys, Geralt took Seltkirk's armor which is the symbol of Courage, from his corpse.

Lifting a curse from a battlefield is no small feat. It requires preparation and a professional approach. The Witcher was fully qualified and, thanks to the advice of other professionals, knew exactly how to approach this thankless task. Among other things, he had to acquire artifacts of the battle, representing the virtues and horrors of war. The symbol of courage was one of them. The Witcher decided to enquire around the camp about the nature of this symbol, for nobody knows more about war than soldiers.
The armor ended up in the hands of Vinson Traut, a cutthroat. To obtain the artifact, the witcher had to find the knave.
The Witcher found Traut, rest assured. Their acquaintance was short, for Geralt slaughtered him not long after they were introduced. Traut was a member of the group scheming against Henselt and attempted to kill our hero when he burst into the conspirators' meeting. He made a mistake, but he did the Witcher a favor, since Geralt took Seltkirk's armor from his still warm body.
This way the Witcher acquired the symbol of courage. 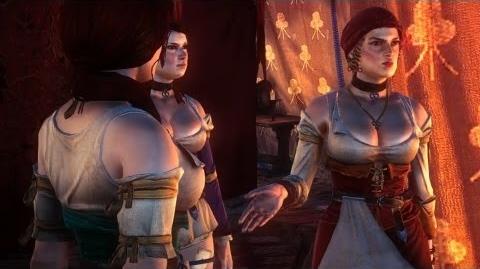