Edit
watch 10:01
Witcher Lore: The Reavers
Do you like this video?
Play Sound

from WitcherGeorge
To meet Witcher Wiki's quality standards, this article or section may require cleanup.
Please help Witcher Wiki by editing the article or discuss this issue on the talk page

Gar and Kennet (in Boholt's absence)

Northern Kingdoms
The Crinfrid Reavers were a group of mercenaries from Crinfrid specialized in fighting dragons and draconids and active throughout the second half of the 13th century.

Originally they were only three - Kennet, Gar and their leader Boholt and they joined many hunts, like the one Myrgtabrakke, a dragon who lived outside Barefield, organized by King Niedamir.[1] However, after Boholt lost his memory the remaining two beast hunters decided it would be wise to recruit. Around 1271, they took a first apprentice called Newboy[2] and a few years later they had entire bands of men like Jamor and Auwry, which they dispatched to countries as far as Toussaint.[3]

The Crinfrid Reavers wiped out all of the dracolizards and forktails in Redania. They also killed three red dragons and one black dragon.

At some point, Geralt of Rivia and Yennefer were to hunt down the golden dragon, but were intercepted by the Crinfrid Reavers, who tied them up and decided to go after the beast themselves. They were not able best it, however, and were quite injured. Meanwhile, Geralt and Yennefer freed themselves from their bonds and moved on.[1]

They raided a Melitele shrine and stole a now cursed talisman. Believing it to be good luck, they survived an encounter with a group of Scoia'tael warriors afterwards, when a dragon swooped in and attacked the elves.[2]

They seek Geralt's help in deciding whether the aforementioned talisman will protect Newboy, their newest member in the upcoming battle, or whether they should put him in armour.

If Geralt warns them that the talisman brings bad luck.

In Foltest's camp, Geralt ran into the Crinfrid Reavers. Having lost his memory, the witcher no longer recalled the trouble this bunch of rogues had caused during the famous hunt for the golden dragon. As it turned out, Kennet, Desbrut and Boholt had recruited a new comrade. With great originality, they called him Newboy. The four were to join in the assault on La Valette Castle that day. The problem was the drunken Reavers had bet one of Foltest's knights that Newboy would survive the battle while attacking solely in his trousers and shirt. A protective amulet they had plundered from a roadside shrine was to help him. Asked for his advice, Geralt expressed doubt about the amulet's protective properties and discourages the Reavers from undertaking their daring escapade. Newboy decided to don his armor. 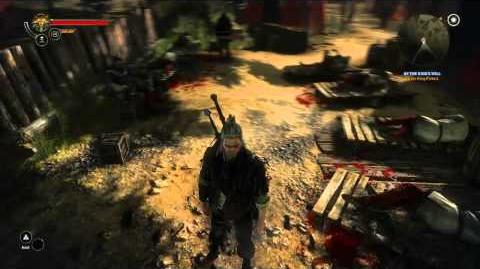 The Crinfrid Reavers in The Witcher 2, (left to right) Newboy, Geralt, Kennet, Desbrut