Cynthia was a mage in the Nilfgaardian Empire's service during the 1270s. She was an apprentice of Vanhemar and, for a short amount of time, Philippa Eilhart who thought of her as mere adept and lover, when in fact Cynthia spied on her all along.

She also had some knowledge on the Wild Hunt and, after Geralt read Wild Hunt investigator's notes, she discussed the phenomenon with him.

In 1271, when a large envoy of Nilfgaardians led by ambassador Shilard Fitz-Oesterlen arrived in the North, Cynthia was sent to Philippa Eilhart's house in Vergen in order to spy on the sorceress. She presented herself as a young adept and no one, not even Philippa, suspected her. While under cover she managed to capture Triss Merigold and compressed her into a small jade statuette which she gave to a messenger to send it to Shilard.

While searching for Triss, Geralt learned from Shilard that Cynthia was actually a Nilfgaardian spy that was sent to infiltrate Saskia's rebels and spy on the Lodge of Sorceresses. Shilard presumed that he could tell Geralt since he would die soon after but he was mistaken.

The Secrets of Loc Muinne

Geralt had not expected to run into Cynthia again, after all that happened, but he did. The Nilfgaardian was leading an expedition in the caverns beneath the Redanian Quarter in Loc Muinne. Their objective was to reach the laboratory of the famous mage, Aep Dearhenna.

Throughout their quest beneath the city's ruins, Geralt had remained wary of Cynthia because of her past actions. And even though mortal danger had melted the ice between them and brought them closer, a quarrel broke out over Dearhenna's device.

If Geralt refuses to use the device: Once the sorceress found the powerful artifact she was looking for, she and Geralt parted. Cynthia went her way with her finding and the witcher went his.

If Geralt kills Cynthia: After the quarrel over Aep Dearhenna's legacy burst into a fight, Geralt killed her and the corridors beneath the ancient city became her grave.

If Geralt kills Adalbert: When a quarrel broke out into a fight between the witcher and Adalbert, Cynthia took Geralt's side. After that, she took the device and decided to return back to the Empire.[1]

Philippa Eilhart's preferences in partners were widely known, yet they were audibly commented upon only in a specific circles, and only when the sorceress could not hear. Cynthia was Philippa's lover at the time – not the first one, and probably not the last.
As it turned out, Cynthia was also a spy for the Nilfgaardian Empire. However, those who could have stopped her saw through her games too late.
Added in Enhanced Edition:
Geralt had not expected to run into Cynthia again, let alone in such an unusual place. But he did. The Nilfgaardian was leading a scientific expedition that was to explore the caverns beneath Loc Muinne. Their objective was to reach the laboratory of the famous mage Dearhenna
Once the expedition reached its destination and the sorceress found Dearhenna's powerful artifact, Geralt and Cynthia parted. Overcoming mortal danger together had melted the ice between them and brought them closer. Cynthia went her way with her finding, and the witcher went his.
Throughout their quest beneath the city's ruins, Geralt had remained wary of Cynthia - and for good reason. Yet as they worked together to overcome mortal danger, the ice between them melted. When a quarrel broke out over Dearhenna's legacy, the sorcerer Adalbert wanted to kill the witcher. Cynthia, however, took Geralt's side.
The corridors beneath Loc Muinne became the sorceress' tomb. A quarrel over Dearhenna's legacy exploded into a fight, and Geralt killed Cynthia.

Cynthia, ah, entertaining Philippa (Geralt seems to keep walking in on them at awkward times).

Cynthia in her spy attire (rendering). 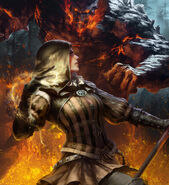 Retrieved from "https://witcher.fandom.com/wiki/Cynthia?oldid=523290"
Community content is available under CC-BY-SA unless otherwise noted.