The Witcher 3: Wild Hunt
Cyprian Wiley, more well-known as "Whoreson Junior", was one of the four crime bosses of Novigrad in 1272 alongside Sigi Reuven, Carlo Varese, and Francis Bedlam. His gang used to control, together with the Blindeyes, The Bits district of the city, where they were in possession of an arena, a casino, a hideout in Novigrad, and a residence in Oxenfurt.

Little is known about Cyprian Wiley's life before becoming part of the criminal underworld of Novigrad. He was the son of Alonso "Whoreson" Wiley who, just like him, was a feared and ruthless crime lord. As a young boy however, Cyprian was often beaten by his father,[1] which might have been the cause of his future cruel and merciless attitude.

In the end, Wiley decided to put a stop to his father's reign by ordering his assassination. Soon after, now under the nickname of Whoreson Junior, he inherited all of his father's possessions like casinos, fighting rings, and brothels and became one of the most powerful crime lords in the city.[2]

Sometime between 1267 and 1272, the most noted crime lords of Novigrad decided to set aside rivalries and forge an alliance of coin: thus Cyprian Wiley, Carlo Varese, Francis Bedlam, Gudrun Bjornsdottir, Sigi Reuven, and Hierarch Hemmelfart founded the Syndicate.

Wiley and Hierarch Hemmelfart started a collaboration: the latter started selling zealots of the Eternal Fire to Wiley, who were later, without their knowledge, sent to his arena to be slaughtered in order to please the audience, as well as fattening the purses of both Wiley and the Hierarch.[1]

Eventually, the four most influential gang bosses of the Syndicate became known as the Big Four, where Wiley still held a well-to-do position.

In 1272, Whoreson Junior was contacted by Dandelion and Ciri, who needed his connections to find someone who could repair a phylactery. Junior accepted to help them, provided that they would bring him Count Reuven's treasure. However, Wiley began to suspect that Ciri and Dandelion were trying to cheat on him, so he kidnapped their friend Dudu in order to capture them when they would come to save him. In the end, Ciri managed to free Dudu and escape from Junior.[2]

Not long after, Whoreson Junior was hired by King Radovid V of Redania, who tasked him with starting a gang war in the city, so that he could take control of Novigrad with ease.

Following Radovid's orders, Whoreson sent his henchmen to the city bathhouse, where the other three members of the Big Four were having a meeting, having already noted Whoreson was acting outside the group's interests, in order to kill them. The attempt failed, however, and Carlo Varese started hunting Whoreson for vengeance, sending his men to raid Junior's hideouts.

At the same time, Geralt of Rivia started looking for him too, hoping to find information about Ciri. In the end, King Radovid himself betrayed Junior as he no longer needed him, and revealed that Whoreson was hiding in a mansion in Oxenfurt.

The witcher headed towards Oxenfurt and finally confronted Whoreson who, after a painful interrogation, revealed everything he knew about Ciri.

If Geralt kills Whoreson Junior: Whoreson Junior was killed by the witcher. Taking advantage of the situation, the doppler Dudu decided to hide in Novigrad by hiding under the guise of Whoreson Junior himself. Despite that, the doppler didn't want to act as a criminal, thus he revealed to his men that he finally converted to the Eternal Fire, selling all his illegal enterprises and instead acting as a respectable businessman. Cyprian Wiley, the man who never helped anyone during his entire life, became one of the most highly regarded citizens of Novigrad.

If Geralt spares Whoreson Junior: Despite what he had done to Ciri, the witcher decided to spare Wiley. Due to the details allegiance with Radovid having been leaked, Junior lost all of his power and was forced to live on the streets; he was endlessly belittled by the city's residents for his predicament, insofar that Ciri considered this to be a better punishment than death.

Cyprian Wiley the younger was one of Novigrad's most dangerous criminals. He had inherited his father's casinos. fighting ring and brothels - as well as the old man's sadistic tendencies, ruthlessness and lack of scruples.
These traits had made the moniker "Whoreson" something of a family heirloom for his powerful criminal clan.
Cyprian also took after his father in terms of ambition. He broke the unwritten armistice between Novigrad's various criminal groups and tried to murder the other three leading underworld bosses.
Whoreson's audacity had a very specific cause - King Radovid. who had commissioned the gangster's actions.
As it turned out. Radovid's plan was for Whoreson to start a gang war in Novigrad. In the resulting chaos. Radovid would take control of the city with ease.
While searching Cyprian's home den of iniquity. Geralt discovered the nickname "Whoreson" was in fact an understatement - something much stronger was needed to describe a man who delighted in murdering captive women.
If Geralt spares him:

Though few would have mourned his passing. Geralt decided not to kill Whoreson. As soon as Radovid withdrew his protection and his old enemies were free to exact revenge. Whoreson's career was doomed to an inglorious end.

If Geralt kills him:

In addition to blackmail, extortion, murder and torture, the list of Whoreson's crimes also included trying to harm Ciri. Geralt took this very personally and made the bandit pay for this last sin with his life.

Scroll 1: Greasy hair, bloodshot eyes, a mess of underworld tattoos, and a grin that'll make your skin crawl. That, dears friends, is the description of a monster worse than most you'll find in any forest or swamp.
Scroll 2: You'll find no man or beast more repulsive in all Novigrad. Nay... The entirety of the Continent.
Scroll 3: This sadistic sod revels in the pain of others. He relishes nothing more than hearing the pathetic whimpers of one's pleas for mercy, then watching as the light of life fades from their eyes.
Scroll 4: Like many men in power, he often has many women brought to his residence. Unlike those many other men, however, he never lets the women leave.
Chest 1: Scholars, philosophers, and religious figures have debated since the dawn of time what can cause a man to become evil. His nature, his upbringing, perhaps black magic or poisons? In Whoreson Junior's case, it was a thick leather belt which his father lashed at him for any reason at all... And sometimes even in the absence of one. Years of fear, pain and humiliation scarred the young Cyprian Wiley. Horrible years for which the people of Novigrad must now pay the price.
Chest 2: Whoreson's lackeys wear masquerade masks and jester hats with bells, and paint themselves with grotesque, clownish smiles. Newcomers to the city often mistake them for entertainers and approach closer to indulge in a show or a laugh. Such a blunders have cost many travelers their coin... As well as many of their lives.
Chest 3: Perhaps Whoreson's most dangerous trait is his unpredictability. One moment he flashes his toothy grin and pats you on the back, then in the next you'll feel his dagger lodged between your ribs. Why? Because of politics, animosity, or coin? No. The mood simply struck him.

Cyprian Wiley and his father 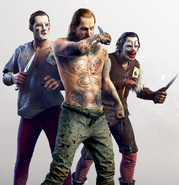