Hierarch of Novigrad
His Holiness
His Excellency

Priest of the Eternal Fire

Cyrus Engelkind Hemmelfart was the hierarch of Novigrad, a grizzled old man, noted racist and religious leader of the North. He was one of the negotiators of the peace treaty that concluded the second Nilfgaardian War.

As a leader of the Church of the Eternal Fire, he is mentioned several times by secondary characters and Geralt can see him as one of the spectators in Whoreson Junior's arena but he does not offer a conversation.

Another opportunity to see him is during the meeting of witchers at Kaer Morhen keep: Geralt, Lambert and Eskel can get drunk and then they mistakenly contact the hierarch via Yennefer's megascope.

There is also a possibility to acquire a painting of him and give it to Dandelion for his Chameleon or display it in Corvo Bianco.

Cyrus is a Syndicate leader introduced in the Novigrad Update.

Scroll 1: Hierarch Hemmelfart may have the appearance of a decrepit man with hands shaking from old age and legs shaking beneath his prodigious girth, but that voice! By the gods, a voice that could move mountains!
Scroll 2: Hemmelfart never utters – he thunders. His fiery sermons echo from his temple's gilded halls throughout all the alleys and homes of Novigrad.
Scroll 3: Non-humans, alchemists, mages and sorceresses – all enemies of the Eternal Fire cower at the sound of his booming oration.
Scroll 4: For, although Hemmelfart is no warrior in his own right, his loyal army of Firesworn zealots yearn for a chance to impose their righteousness will upon the wicked.
Chest 1: As Hierarch of the Church of the Eternal Fire, Cyrus Hemmelfart is a man of great power and the knowledge of how to wield it. Absolutions, excommunications, indulgences... they are, all of them, excellent tools for applying pressure on allies and foes alike.
Chest 2: Hemmelfart quickly ascended to the peak of the Church's hierarchy and equally quickly became accustomed to the privileges that accompany the position. He adorns himself in silks and satins, drinks rare wines from silver chalices, partakes only of the most sumptuous fare and, discreetly of course, keeps many supple bodies to warm him in his bed...
Chest 3: Many Novigradians often wonder whether the Church of the Eternal Fire's chief ideologue himself even believes in the faith's doctrine. Does he truly believe a new and better world will rise from the ashes of righteous flame? Of course, not a soul would ever utter these questions in public, for they know that those who do find themselves branded heretics and burned alive atop a pyre... 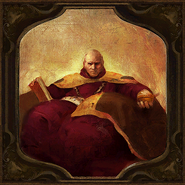 Painting in The Witcher 3: Wild Hunt 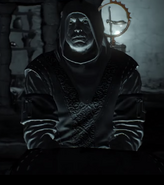 Retrieved from "https://witcher.fandom.com/wiki/Cyrus_Engelkind_Hemmelfart?oldid=523996"
Community content is available under CC-BY-SA unless otherwise noted.