Dagon is a mythical creature; according to the legend, it rests at the bottom of a lake near the village of Murky Waters.

Dagon is a deity, so he can not be killed.

The creature receives energy from its believers' faith, which might be his only weakness.

When Dagon ventures out on land, destruction follows him.

According to an ancient legend - Dagon secretions
Dagon is an underwater being worshiped by the vodyanoi and a small sect of humans as a god who awaits at the lake bottom for the right configuration of stars so that it may return to land to wreak havoc. Since it uncertain when this will come (or if it will come at all), it whiles the time away terrorizing all who live both under the water's surface and on land nearby.

Dagon is one of the boss monsters in the game. He appears in Chapter IV as part of the Ripples quest. He is worshipped by one faction of the vodyanoi who inhabit the Underwater City in Lake Vizima. The other vodyanoi worship the Lady of the Lake.

That is not dead which can eternal lie, and with strange aeons even death may die.
Powers older than humanity slumber in the depths, where no sunrays disturb them. Gods and demons sleep in underwater cities awaiting their time, and it is said that when the hour comes, they will awaken and bring annihilation to the world. One of those creatures, Dagon, rests at the bottom of the lake and is worshipped by vodyanoi and lunatics. Dagon is an embodiment of strength and fury, and when he comes ashore, he becomes destruction incarnate. Forbidden books like the Hymns of Madness and Despair describe the ways to summon him, for he can only be called to a place dedicated to him.

Deep in the eternal darkness of the abyss, powers older than men and elves lie aslumber, awaiting a time known only to them. When that hour strikes, they will awake and bring an end to the world. One such being bears the name Dagon.

Dagon's emergence is usually presaged by a thick fog, impermeable to wind or sun, that suddenly envelops a body of water. After that comes a gurgling and a powerful waft of slime and rotten seaweed. And after that... well, no one who's failed to flee at this point has lived to tell the tale.

When fighting in the fog, it is often difficult to estimate the enemy's strength. Anyone who has fought the monster hordes under Dagon's control knows this very well. Those beasts' numbers seem to double and triple when wrapped up in their dark lord's tendrils of fog. Within that murky mist, fangs and claws attack from all sides, leaving no room for retreat, no chance for rest.

Some claim the more sentient monsters consider Dagon something of deity, that they worship him, make him offerings of human sacrifices. It is difficult to say how much truth lies in this... Though it is clear he commands not just creatures of instinct and herd behavior, but also headstrong recluses such as ancient foglets and leshens.

Developer CD PROJEKT RED's characterization of Dagon taken from the monsterbook, which was enclosed with the Collectors Edition of the computer game The Witcher for Poland, Hungary and the Czech Republic:

When it became clear that there would be a water god in the game, the choice of his name proved rather obvious. It should seem familiar not solely to Lovecraft fans, because Dagon, an ancient creature, is not only mentioned in the Old Testament, but was also worshipped as a water deity in Phoenician mythology.

In 'The Witcher', Dagon is a minor deity and ruler of the Underwater City. He is worshipped by the vodyanoi and a sect of swamp inhabitants. His horns, framing the head like an aureole, bring to mind ancient demons, while the embellishments on his body emphasize that the vodyanoi are a civilization of thinking creatures rather than another breed of monsters. Dagon's worshippers highly value precious stones, particularly turquoise. The vodyanoi use the latter to make decorative elements for their artworks, clothing and buildings. The eyes of Dagon's statue on Black Tern Island are made of this stone, which also appears in other parts of the temple and on the breast plates of vodyan mages and warriors. The god himself likewise wears turquoise-encrusted adornments.

As one would expect of a divinity, Dagon is a huge creature, towering above his worshippers and human alike. Only the golem's model is taller. His limbs are actually fins, rendering him a great swimmer, but rather awkward on dry land. As most of the time he lays dormant in depths where the sun does not shine, he does not rely on sight, and his eyes resemble narrow cracks. Dagon emerges from the deep only when summoned by ritual.

"With only slight churning to mark its rise to the surface, the thing slid into view above the dark waters. Vast, Polyphemus-like, and loathsome, it darted like a stupendous monster of nightmares to the monolith, about which it flung its gigantic scaly arms, ( ... ) bowed his hideous head and gave vent to certain measured sounds."
– H.P. Lovecraft, Dagon 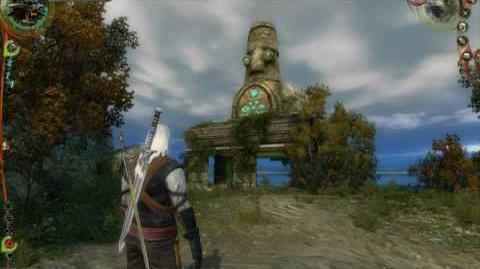 Dagon — an underwater god worshipped by both humans and vadyanoi.

In this drawing the artist emphasized Dagon's reptilian and amphibian features. 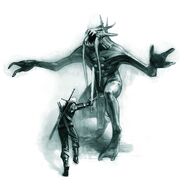