Damien de la Tour was the captain of the Ducal Guard in Toussaint during the reign of Anna Henrietta.

One of the people Geralt encountered at the Beauclair court was Captain Damien de la Tour, the captain of the Ducal Guard. He was absolutely and unconditionally (to say "unthinkingly" would be unfair, yet not entirely inaccurate) devoted to his position and worshipped [sic] the ground the duchess walked on. If you want my personal opinion, he was most definitely besotted with her.
He came across as a typical soldier, i.e., a thickheaded lackey who, seeing Geralt, immediately decided he must prove who had the more massive unmentionables. Geralt treated this challenge with dispassionate superiority, yet accepted it nevertheless and in doing so earned himself another enemy.
After he bloodied himself side by side with the witcher, Damien decided the White Wolf was actually an altogether decent fellow who wished only to help. One could even say they shook hands and made up. In their hearts, at least.
In the end, what appeared at first to be inconceivable took place. Captain Damien de la Tour stopped looking at the White Wolf like a fox outside a hen house. All it took was for Geralt to save Beauclair from the Beast's attacks. Once that was done, the two men became friends, in their gruff, manly way.
If Syanna was killed by Dettlaff:

After Syanna's death, Damien fell deep into mourning, for he took to heart anything that caused his duchess pain. He was not only the main executor of her orders, but also her close companion and sympathetic ear. He dealt with these emotions in the gruff way of a solider and respected the rules of propriety, which kept him from casting blame during the mourning period, even though, according to him, that blame should fall squarely on a certain witcher from Rivia...

If Syanna killed her sister:

When Anna Henrietta was treacherously murdered by her own sister, Damien blamed himself most of all and wanted to fall on his sword, as he felt befits a man of honor. The only thing stopping him was the thought that Her Grace would never have forgiven him that. Damien spent many years deep in mourning, often thinking about how the tragic events had come to pass and who was responsible. This meant not only the duchess had died, but all chances for a friendship between him and Geralt of Rivia as well. 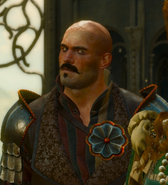 Always behind the Duchess 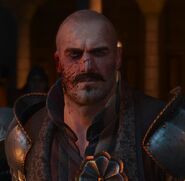 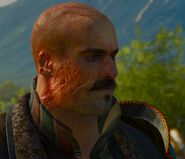