Deer hide
Raw meat
Deer is the family of ruminant mammals. Its species include, among others, the moose, red deer, reindeer, fallow deer and roe deer. They are natural food for wolves, bears, panthers and other predators. None of those has been domesticated yet; however some members of the Elder Races are able to ride them.[1]

Members of the human cultures tend to hunt deers for food and fame. They are though protected in some areas, like surrounding of druid circles or royal forests - where only the nobility have a permission to hunt. 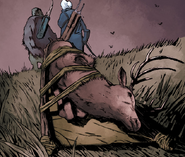 Dead deer in The Witcher: House of Glass.

Geralt and Aideen riding one in comics. 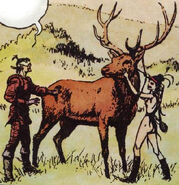 Deer as appeared in Zdrada comics.

Português do Brasil
Community content is available under CC-BY-SA unless otherwise noted.
Advertisement