A Potion for Triss
Berengar's Secret

Defending Kaer Morhen is the very first quest of the game and it spans the entirety of the Prologue. It is the game tutorial. In this quest, our hero Geralt of Rivia learns (or re-learns) to use a sword, fight, cast signs, brew potions and skin monsters. He learns the basics of what he can do and gets a taste for what he could do. All this as he and his fellow witchers try to fend off an attack on Kaer Morhen by the nefarious Salamandra.

After being found, unconscious in the woods outside Kaer Morhen, Geralt is taken back to the fortress and nursed back to health. The witcher is just beginning to get his bearings when the fortress is attacked by a bloodthirsty gang led by at least one mage and a notorious outlaw known only as the "Professor" seeking riches from the 50

bounties placed on the Witchers' heads.

Lambert is the first to notice that something is wrong. He cautiously makes his way to the main gate of the keep where he is met by the first wave of the attack. He fends off several of the raiders, but realizing that there are quite a few more, he retreats to warn the others of the attack.

Realizing the immediate danger, Vesemir assesses the situation and takes charge. He presses Geralt into service, telling him to grab a sword from one of the training forms and help fend off the assault. The Witchers, with the help of Triss, manage to hold off the onslaught long enough to reach the gate to the upper courtyard, but to combat the raiders, the witchers must get past a closed gate to the inner courtyard.

Vesemir orders Geralt to get to the winch and open the gate by using the back way through the tower. As he works his way along the battlements, he encounters multiple enemies grouped alone or in pairs. Reaching the tower, he stops short just in time to avoid falling into the pit which has replaced a large portion of the former tower. He runs up th remaining stairs, triggering a collapse that kills multiple pursuers and cuts the remainder of them off.

Finally reaching the upper courtyard, a few more bandits attempt to stop Geralt as he progresses, but he finally defeats the raiders guarding the winch and opens it, allowing his beleaguered allies to enter the inner courtyard. Triss then collapses the entrance to keep their attackers out, allowing for a short breather in the fighting.

The group learns that the Professor has killed at least 17 people and is wanted in several of the Northern kingdoms. Triss has heard of the mage, Savolla, but does not have very much information other than the fact that he is mad.

On Vesimir's orders, Leo and Geralt run into the keep to protect the lab holding the famed witcher mutagens. They work their way through the keep, fighting though multiple groups of enemies. They find the lab only to see it being ransacked by the Professor and the mage and their path blocked by a magical barrier. When the mage collapses the stairs out, the Witchers have no choice but to continue into the Crypt of Kaer Morhen.

Leo then suggests that Geralt clear the side passage so that they can advise the others of what has happened. Leo explains that he can not clear it himself because he broke his hand training and can not form the Aard sign. Worse still, Geralt can not remember the Aard sign, so Leo proposes they go to the circle of elements and see if that jogs the witcher's memory. Thankfully, it does, so they return and Geralt clears the passage to the main keep.

At this point, Geralt is faced with a choice. He can help Triss save the lab, or help Vesemir and the other witchers fight the frightener.

Triss: Triss, Leo and Geralt go head inside the keep. Geralt takes on and kills Savolla. Triss goes on ahead to try to save the lab. Leo and Geralt catch up to an injured Triss who warns them that the Professor and an even more powerful mage are in the lab.

Vesemir: Geralt and the other witchers take on the frightener and kill it. Triss then teleports in, wounded and advises them that the Professor and an even more powerful mage are in the lab.

Meanwhile, the nameless mage has already escaped through a magic portal with the witchers' secrets, leaving the Professor behind to "clean up". Some typical bad guy posturing and then Geralt sets out to kill the Professor, but so does Leo, and less expertly so. The Professor spies his opportunity and fells Leo with a single shot from his crossbow. He then makes his own exit through the magic portal, leaving Geralt to tend to the dying young man.

As nothing can be done for Leo, Vesemir tells Geralt to rest. Afterwards, Geralt makes his way back to the main hall to help Lambert, triggering the quest A Potion for Triss. Afterwards, the group meets at Leo's funeral pyre, and decides to split up to search for the men behind the attacks.

Siding with Triss: Geralt finds a sapphire on Savolla's corpse. Later, in Chapter I at the Merchants' bridge, he faces the Salamandra only, no Armored hound. This means that only two pieces of red meteorite ore and one blue can be used to forge a new sword at the end of Chapter I, but siding with Triss seems to net a greater XP reward (Quest + Kill XP) than siding with Vesemir (though I can not find any evidence of this in the quest file). Killing Savolla is worth 390 XP.

Siding with Vesemir: After the fight with the frightener, Vesemir gives Geralt a piece of red meteorite ore, which enables the forging of a three-red-meteorite sword at the end of Chapter I, which is the best damage-dealing sword of the meteorite swords. Also in Chapter I, at the Merchants' bridge, the witcher faces an Armored hound, in addition to the Salamandra. Killing the Frightener is worth 390 XP, but this is difficult, as you need to make the bell and cauldrons resonate and then be in time to deal the death blow while all the other witchers are also attacking it. It is easier if you do not kill any Salamandra and let them distract the other witchers instead. Be prepared to load the autosave with the choice several times if you want the XP from this path.

The Gate is Shut!

I disposed of the bandits guarding the gate. Now I need to open it. I must open the gate.

One of the bandits is a mage. He cut off our way out. Leo will lead me to the Circle of Elements, where I can learn the Aard sign, a telekinetic spell that will help me clear the exit. I must follow Leo and learn the Aard Sign.

The Circle of Elements

Moving Inside Kaer Morhen or The Courtyard

Triss: To the Laboratory!

I killed Savolla. Now I need to get to the laboratory. I must run to the lab.

Vesemir: To the Laboratory!

Talking to Triss and Revenge or Revenge

Triss had a lot to say... Leo's funeral will be soon. I should talk to Triss again, or to Vesemir... I should speak with either Triss or Vesemir and then go to Leo's funeral.

The bandits who attacked Kaer Morhen shouted the word "Salamandra" - probably the name of their organization. I won't let Salamandra get away with attacking the witchers. I'm a witcher myself. I'll avenge Leo's death and recover the secrets stolen from Kaer Morhen. I aim to avenge Leo's death and punish those thieves called Salamanders, who stole the witchers' secrets. (4000 XP)

The bandits who attacked Kaer Morhen shouted the word "Salamandra" - probably the name of their organization. I won't let Salamandra get away with attacking the witchers. I'm a witcher myself. I'll avenge Leo's death and recover the secrets stolen from Kaer Morhen. I aim to avenge Leo's death and punish those thieves called Salamanders who stole the witchers' secrets. (4000 XP) 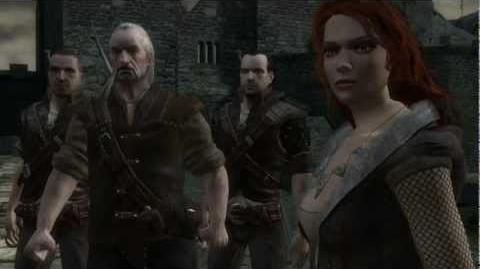 Retrieved from "https://witcher.fandom.com/wiki/Defending_Kaer_Morhen?oldid=495589"
Community content is available under CC-BY-SA unless otherwise noted.