The Price of Neutrality premium module
Deidre of House of Ademeyn was a princess that had the great misfortune of being born during a total eclipse.

Deidre Ademyne was Eskel's surprise child. She became Eskel's "Unexpected Child", as Vesemir put it, when the witcher saved her father's, then the prince of Caingorn, life. In gratitude, the prince promised Eskel "that which he would find but did not expect" when he returned home. This, as it turned out was the pregnancy of his wife, and therefore Deidre. Because of this Eskel and the girl shared a special bond. For example, Deidre said that she needed to only think of Eskel to know exactly where he was at any given time. She said they are bound by Destiny.

Deidre was first in line to inherit the titles of her recently deceased father. It appeared the elder Ademeyn succumbed to syphilis. The second in line, her brother, Merwin Ademeyn, a nobleman on King Henselt's council, did not want her to rule as he believed she was not fit. He seemed quite willing to make sure she would not have the crown, enlisting the help of a powerful sorceress.

The sorceress, Sabrina Glevissig, said Deidre had been affected by the Curse of the Black Sun. Sabrina wanted to kill the princess as well to examine her body and discover the "truth" about the Black Sun for the Council of Mages.

Deidre was born during an eclipse, and this is why she was considered to be affected by the so-called Curse of the Black Sun. She appeared completely normal, but she did emit an aura which had apparently been increasing in power over the years. This aura prevented magic from being used in her presence, and this included witchers' signs as well as spells cast by other magic users. Deidre herself said that her aura also dispelled previously cast spells when she was present.

From Merwin, we heard a sad tale from Deidre's childhood. It seemed that at the age of 12 she was raped by a charlatan claiming to be a mage. Actually, he claimed to be an altogether different kind of specialist: an oneiromancer, or diviner of dreams. This "mage" claimed that he needed to spend a night in Deidre's chamber as she slept. He would mix a brew designed to amplify her dreams. The old man could barely walk, had a beard down to his waist... Deidre's family suspected nothing.

He seemed to do as he claimed he would. By morning he was gone, but several valuable items had also disappeared from Deidre's chamber, including her favorite mother of pearl comb... Only the laundresses in the outskirts saw the miscreant, claiming that he fled as if chased by demons.

The prince ordered a search, but it was too late. Her father, who had hired the mage, refused to believe her claims of rape, saying that the cheat was an old man... And the bed linens betrayed nothing... This caused Deidre to flee assisted by "a young stable boy described as "an excessively broad-shouldered oaf". This could have been Roben, a man later described as a lover of both Deidre and Sabrina Glevissig, depending on whom you believe.

A search party was organized to find the youngsters, but they had disappeared without a trace. A week later, folk inhabiting the area where he was found claimed to have seen a young girl and boy ride through on large wolves... the stuff of fairy tales. The charlatan was ultimately found dead, having had his "manhood" removed. The implication being, of course that Deidre exacted her revenge.

After some time passed, Deidre returned to the castle. From then on her father ordered the dogs set upon any mages that approached, assuming that any true sorcerer would surely manage to avoid a few bear-hunting hounds... And then Sabrina appeared.

Deidre can be found inside the walls of Kaer Morhen where the witchers have taken her in. She camps in the inner courtyard, accompanied by her faithful companions, Beann'shie and D'yaebl.

Merwin Ademeyn admits that as the first-born child, Deidre is legally entitled to inherit all titles and estates from their father. However, he simultaneously claims that she has lost that right and certainly should not rule given that she is a cruel changeling.
According to the sorceress Sabrina Glevissig, Deidre Ademeyne has been affected by the Curse of the Black Sun, rendering her a mutant both cruel and evil.
Deidre became Eskel's Unexpected Child when the witcher saved her father's life. In gratitude, the prince of Caingorn promised Eskel whatever unexpected thing he found when he returned home. Eskel and the girl share a special bond, some might even say they are bound by Destiny.

Legends of The Witcher The Curse of The Black Sun Deidre 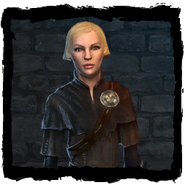