Witcher Wiki
Register
Don't have an account?
Sign In
Advertisement
in: Mahakamans, Dwarves, The Last Wish characters, The Lady of the Lake characters
English

The Last Wish
The Lady of the Lake

Dennis Cranmer was the dwarven captain of Duke Hereward's guards. He was stocky, with flaxen hair and beard and steel-grey eyes. He was depicted as a very fair and impartial individual, if fervently dedicated to fulfilling his duties "to the letter".

Dennis Cranmer once accompanied Arthur Tailles and Falwick when they confronted Geralt of Rivia and Dandelion in the city of Ellander. Falwick and Geralt agreed on a duel between the witcher and Tailles, and a rule was made, if Geralt's sword touched the young knight, the witcher would be dragged in front of Hereward.

Dennis stayed for the fight watching Geralt best Tailles, and grew admiration for him, with the two parting on good terms.

He later joined the Temerian Army as a volunteer, taking part in massive battles like Mayena and Brenna. 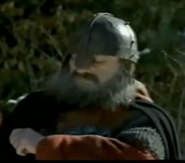