Detmold (Dethmold[1]) was a flaxen-haired mage from Pont Vanis who studied in the magic school of Ban Ard. Him and his brother, Drithelm, were in the service of King Esterad of Kovir.[2]

On the last night of June 1267, he and his brother travelled from Kovir to Thanedd Island, for the Grand Mage's Assembly between the Chapter and the Council. That evening, during the banquet, they spoke with Triss Merigold and tactfully snuck off after their introduction to Geralt and Yennefer, so Triss could speak privately with them.[2]

In the early hours of dawn, Detmold joined the Northern supporters in arresting the Nilfgaardian-allied traitors. He was summoned by Keira Metz to help decide what to do with Geralt, and in frustration simply suggested they throw him in dimeritium shackles like the traitors, and take him to Philippa Eilhart for further judgement. Sigismund Dijkstra agreed, though they escorted him to Philippa without binding.[2]

Dethmold is a main character in The Witcher 2: Assassins of Kings. He was the mage advisor to King Henselt and featured heavily in the plot if Geralt allied himself with Vernon Roche. His hair color was not apparent in the game, if he even had any left. Dethmold was amoral and would do anything to gain power for himself and/or Kaedwen.

If Geralt sided with Roche during the ambush: Triss Merigold contacted Dethmold by using Síle de Tansarville's megascope, to ask him what was going on in Aedirn and whether he knew anything about the kingslayers. After a conversation in which she didn't learn much, Triss ended their correspondence.

Roche's Path: After Sabrina Glevissig's curse had been activated, Dethmold used his magic to help Henselt, Geralt, Vernon Roche and Síle de Tansarville traverse and escape the eternal battle within the mist. Later on, as Geralt was commissioned to lift a curse on Henselt personally, alongside that of the eternal battle, the Koviri mage co-operated with him to gain understanding of these curses and resources for lifting them. He also gave Geralt a talisman that would allow him to cross the mist into Vergen. Additionally, Dethmold asked the witcher to investigate a square coin conspiracy against king Henselt, offering a reward for its supposed leader, Vinson Traut.

Later, after an assassination attempt on Henselt from two of the kingslayers, Serrit and Auckes, was foiled by Geralt, Dethmold suggesting using Hanmarvyn's Blue Dream - a necromantic ritual - on the dead Auckes, prompting dismay from de Tansarville. However, as Geralt agreed to undertake the ritual, it went ahead as planned and gave them two vital pieces of information: the location of the killers' hideout and that Síle had been in league with the kingslayers. Afterwards, Dethmold gave Geralt another item required to lift the curse, meaning that the witcher would soon be ready to dispel the mist for good.

In the coming days, during Geralt's absence, Dethmold and his spies managed to find out that the leader of the conspiracy was Roche - the Temerian special forces commander and an ally of Geralt's - who was also found to have been behind the demise of Bernard Loredo and thus Kaedwen's plan to annex part of Temeria. Upon realising this, on Henselt's order, Dethmold had the Blue Stripes executed; the mage invited them to a celebratory feast in Roche's absence and then had every last one of them (alongside various Kaedweni soldiers who were also part of the conspiracy) arrested and hanged. The mage subsequently participated in the siege of Vergen, hiring the services of the mercenary, Adam Pangratt. Upon being vengefully confronted by Geralt and Roche, Dethmold fled.

Dethmold eventually went to Loc Muinne as a representative of Kaedwen for the upcoming summit. Having found out about the existence of Anaïs La Valette, an illegitimate daughter of king Foltest, Dethmold had her kidnapped and incarcerated via a magic barrier within the Kaedweni quarter to be used in the soon-to-be talks. However, king Radovid of Redania caught wind of this and, desiring the girl for himself in order to legally acquire Temeria, informed Geralt and Vernon Roche about the girl's imprisonment and made an arrangement with the two to rescue her from the Kaedwenis.

If Geralt saved Triss: With Geralt opting to rescue Triss from the Nilfgaardians, Roche assaulted the Kaedweni quarter on his own. Although Roche managed to rescue the young La Valette, Dethmold escaped. His fate following this is unknown.

If Geralt helped Roche: Together, Geralt and Roche stormed the Kaedweni camp. Upon meeting Dethmold, the Blue Stripes captain promptly broke the mage's arm and forced him onto the floor. After a short exchange, Roche proceeded to brutally castrate and mutilate Dethmold with a knife, killing him.

At some point later, Síle managed to locate the hideout of the kingslayers. Dethmold sent his men there to capture the renegade witchers; Letho managed to escape, while his two accomplices were attacked by the soldiers. One was killed and the other was taken alive but eventually died under torture.

Latterly, Dethmold was present during the siege of Vergen. Using his magic, he destroyed the blockade at the entrance of the town and participated in the battle. He and his soldiers later confronted Geralt and Saskia in the cave network underneath the town, resulting in a skirmish in which Dethmold incapacitated Geralt with spells. In response, Saskia transformed into her dragon form to save the witcher from death, killing several of Dethmold's men and causing the mage to flee via portal.

After the battle ended and the Kaedweni forces were defeated, Dethmold was accused of war crimes and charged with execution by Philippa Eilhart and Saskia (whose will had become Eilhart's), as a covert way to influence Henselt by having the Lodge member Síle as his advisor instead. Despite the protests, Henselt reluctantly agreed to let Dethmold be killed, at which point the mage was beheaded by one of the dwarven militia in the town square.

Dethmold was known to be courteous and friendly, although he likely had ulterior motives for being nice. This could have also been a ploy to make himself appear as less of a threat to others. Despite his friendly projection, his appearance and attire have been known to terrify several people.[1] He had a notably poor relationship with Síle de Tansarville, who he saw as a rival. De Tansarville claimed that Dethmold was "an overgrown baby" and "as jealous as he is childish", implying that she saw a possessive side to his personality.

Later on, he revealed he was at least partially sadistic, delighting in the torture of prisoners and had brutally killed and mutilated victims with magic. He also had no qualms with performing necromancy, a banned form of magic. Dethmold had no scruples when it came to kidnapping, execution or other socially frowned upon actions. He had a non-existent morality - and this carried on to his advisee, Henselt of Kaedwen. The Koviri mage had a particularly formidable network of spies, such as Arnolt Malliger, which helped him to co-operate with Bernard Loredo to annexe Flotsam and uncover Roche's role in the conspiracy against Henselt. Dethmold's protectiveness of Henselt was highlighted by Auckes, who lamented that he "never lets Henselt out of his sight" and saw him as an obstacle in assassinating the Kaedweni king.

As revealed during Chapter III on Roche's path, Dethmold was also homosexual. He was seen with his manservant who was also his sex slave (though it is not proven besides the words of the servant himself) while preening in front of a vanity, gently caressing his acne, warts and zits. There were a number of suggestive items scattered around his chambers in Loc Muinne. Dethmold also had an apprentice and a little commando for his safeguard.

Sorcerer Dethmold is one of the more distinctive characters in the Witcher 2. One of the more distinctive, and one of the most despicable too. Dethmold, one of the witcher's opponents, is a wind mage. We thought hard on how should he look to become synonymous with that element. We dressed him... warmly. His entire neck. As if he lived in a constant draught. And we gave him a staff with a rooster weathervane usually found on roofs.
Dialogues with this guy are generally wacky, because Dethmold is... Dethmold is so... unsettling, I should think. We were looking for an appropriate voiceover for Dethmold for a long time. We wanted him to be a guy whose voice sends shivers down your spine, signalling something is way off. 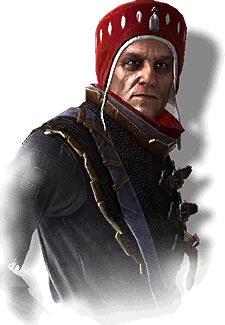 Apart from a few chance encounters at official banquets, Geralt had the occasion to meet and speak more extensively with this sorcerer on Thanedd Island, during the bloody coup, when all manner of mages jumped at each others' throats and their Council and Conclave ceased to exist. Dethmold and his brother Drithelm, both in the service of King Esterad of Kovir at the time, attempted to remain neutral as events unfolded. To no avail, however, as those who had allied themselves with Nilfgaard thought nothing of the impartiality of others, and many mages simply perished, brought down in fanciful ways by their colleagues' spells or pierced by the arrows of the Scoia'tael summoned to the island by the plotters. Drithelm met just such a fate, while Dethmold saved himself by fleeing.
Dethmold then filled the opening for a sorcerer-advisor at the court of King Henselt of Kaedwen, and proceeded to place all of his abilities at the monarch's disposal.
All said and done, Dethmold was certainly a talented sorcerer. It was only his power that brought the king and his retinue safely through and out of the mist of wraiths.
The sorcerer believed that the ends justified the means and thought nothing of the ethical ban on necromancy.
If Geralt chooses Roche's path during the end of chapter I:

The sorcerer was Henselt's creature in full, a lackey who served his master in any way possible. This included tracking real and imagined spies and thwarting conspiracies on the monarch's life. He was also among those chiefly responsible for the deaths of Vernon's men, whose grisly demise Henselt himself had ordered.
Dethmold fled, unwilling to risk a clash with the witcher. It proved a sound decision, which bought him a bit more time in this life.
Their next meeting proved to be their last, as Dethmold died at the hands of the vengeful Roche. Geralt never revealed the details of the sorcerer's demise. I've concluded that it must have been quite savage, though I would prefer to hope that Vernon's threats had been but figures of speech...

During the Battle of Vergen, Dethmold aided the attackers, using his magic to destroy fortifications and key defensive positions. It is clear that had they been deprived of his talents, the Kaedwenis would not have penetrated so far.
Though Henselt was spared because of his royal lineage, Dethmold met a fate appropriate for a tyrant's faithful and hated servant. The sorcerer's life ended in the central square of Vergen, a town he had hoped to help seize and bring to its knees.

Dethmold and Triss in Flotsam. 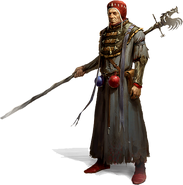 Render from The Witcher 2: Assassins of Kings.