Witcher Wiki
Register
Don't have an account?
Sign In
Advertisement
in: Creatures, The Witcher Chapter IV, The Witcher bestiary,
and 2 more
English

Devourer, or Black Annis,[1] are said to derive from a tale of Baba Yaga where a man happened upon a devourer. If so, a disclaimer is required: the tale was softened. It provides only a faint idea of what can happen to a stray traveler who should have the misfortune of passing near a devourer's lair.

Devourers are scavengers which live near human settlements, usually in caves and ruins

Immune to conventional poisons and resistant to knockdown attempts

Devourers try to knock down their victims and eat them alive

"Devourers are often called night witches, because they resemble old, ugly women and are famous for their witch-like viciousness. These creatures gorge themselves on human flesh; although they willingly eat carcasses, above all they crave flesh that is fresh and warm. Devourers hunt after dark in groups that peasants refer to as sabbaths. They like to deceive their victims and torture them, but there is no truth to the tales of their midnight flights on broomsticks and their gingerbread houses."

Quen helps guard against their attacks, but be mindful of rotfiends, which also like to join the fight and can quickly overwhelm you. A blizzard potion will help tip the odds in your favor and make the fight easier: after you build up your adrenaline points, the enemies will move in slow motion allowing you to avoid hits and makes attacks a lot easier.

Like their cousins, the rotfiends, devourers will explode when their health reaches a certain level. When you see them start to choke and their heads swell, back away quickly. Their death attacks can damage nearby enemies as well.

Developer CD PROJEKT RED's characterization of the devourer taken from the Monsterbook, which was enclosed with the Collectors Edition of the computer game The Witcher for Poland, Hungary and the Czech Republic:

Like the noonwraith, this monster is strongly rooted in Slavic lore. It began with a name mentioned by Sapkowski; the idea that the devourer should resemble an old, menacing woman followed soon after. The artist strove to create the ugliest possible hag, and thus was born the devourer. In its final form, the devourer is a hag with a wonderfully hooked nose, drooping breasts and a swollen, wrinkled belly. Its open mouth curves into a spiteful grin, and the protruding tongue and pulled back hair make it resemble a dog panting after a chase.

The devourer embodies children's nightmares of a mischievous, sadistic witch waiting to carry off naughty children. In an illustration of one of Geralt's flashbacks, the witcher defends a boy from a devourer. The way she glares at the urchin explains the fear in his eyes. 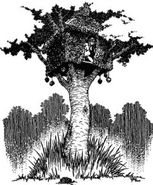