Vaska or the hierophant

The Viziman Connection
Following the Thread
Lock and Key

Depending on your point of view, either Vaska or the Hierophant gives Geralt the Diplomacy and Hunting quest in Chapter III. They both contribute information to get things started in this quest which reveals even more about the Salamandra organization and the extent of its reach.

Vaska gives Geralt this quest upon the completion of Reaping time, when the witcher finishes that quest and returns to her with the report. After thanking him for all his help (as he has also found the missing boy by then) she tells him that the Druids have been keeping an eye on Salamandra and could help him with his plan to dismantle the organization. She tells him to seek out the Hierophant for more details.

Geralt then goes to the Druids' grove and speaks with the Hierophant who tells him that he has "heard it on the wind and seen [what the witcher wants] through animal eyes."He explains that Salamandra wants to increase the potency of fisstech and have asked the druids for help with ingredients. He also offers to help kill Roland Bleinheim by luring him with talk of this more potent ingredient for the drug-lab. For this, He wants a psilocybe mushroom, which he tells Geralt is in the swamp cave to the south, guarded by cockatrices.

The witcher then heads over to the cave to find and pick the aforementioned mushroom. It is entirely possible at this point in the narrative that Geralt has already cleared the cave of the cockatrices as that is where he found one of the three groups of hostages in Reaping Time and the missing boy.

Having secured the mushroom, our hero then returns to the grove with it. The Hierophant is grateful for the help, but this is just the beginning. He gives Geralt time to get ready for the ambush, if he needs it. When the witcher is ready, they head out, but not alone; the Hierophant also brings his wyvern friends as backup. He also provides the witcher with heal services during the battle (unless he is knocked down himself, but do not worry, he will get back up after the fight.)

After the battle, Geralt loots the remains (of course!) and finds an Encrypted document as well as a Royal letter of safe conduct on Roland Bleinheim's dead body. The document can not be read as is, it needs to be decoded, so Geralt has to wait until he has completed the The Viziman Connection quest and found the key to the Salamandra code to further the investigation. He thanks the Hierophant and they have one last little chat which concludes the quest.

Geralt learns of the druids' fight:

I learned the Druids are willing to help me combat Salamandra. I should speak to the Hierophant in the Druids' grove.

Geralt stumbles on the Salamandra camp:

Geralt learns of the druids' fight:

The Hierophant told me Salamandra has been harassing the druids, trying to force them to cooperate. We need to get the Salamandra leader out of their camp, set up an ambush. To do this I must find a psilocybe mushroom and bring it to the chief druid. The mushroom grows in cave [sic] - a cockatrice-infested one, unfortunately. I must retrieve a psilocybe mushroom from the cave indicated by the druid.

Geralt stumbles on the Salamandra camp:

Roland had a coded message on him. Now I need a key to decode it... I've captured some Salamandra documents. I can now pursue some other leads.

I should get ready, the Salamanders will arrive soon. There'll be a fight, that's certain. I should prepare...

Roland had a coded message on him. Now I need a key to decode it. In the meantime, I need to get the document I found to Leuvaarden. I have what I came for. Time to bid the Hierophant farewell.

I solved the Salamandra problem in the swamp and found an encrypted letter in the process. I need to know what it says. Leuvaarden is my best bet. I can now pursue the other leads in the investigation. (4000 XP) 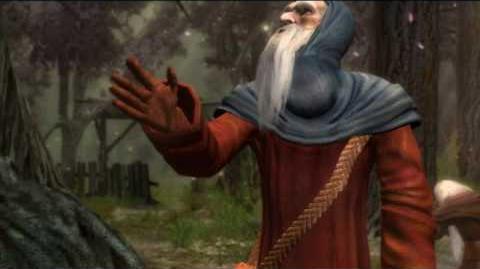 Diplomacy and Hunting
Retrieved from "https://witcher.fandom.com/wiki/Diplomacy_and_Hunting?oldid=455575"
Community content is available under CC-BY-SA unless otherwise noted.