Dracolizards or Slyzards (Polish: Oszluzg) are a large, grey-colored flying reptile, sometimes as big as a dragon, for which they are sometimes mistaken. They have long spiked tails, and are so strong a clean strike from their tail is unable to be parried.[1]

It is said that Crinfrid Reavers made sure that all members of this species were killed in Redania.

Slyzards are unique draconids as they aren't affected by stunlock after dodging and punishing one of their attacks. To adapt to this, alternate between dodging and landing a single hit. Evade to the side, strike once, then prepare for the counterattack, and repeat the cycle. Getting behind or beside the slyzard doesn't guarantee your safety, as the slyzard can strike behind it with a lash of its tail. Sometimes the slyzard will attack by breathing fire, which locks it into an animation for a time, which can allow two or even three retaliatory strikes. It's easily dodged with a dash if you're in close, but can catch you off guard at a distance, so if you haven't gotten in melee range, watch carefully for its fire attack.

Prevent its attempts to escape to the skies with a quick auto-aimed shot from the crossbow. The slyzard will fly straight backwards as it takes off, so you can rely on Geralt's aim alone to bring it crashing back down. If it does manage to fly, you can wait for it to dive at you and shoot it with an auto-aimed bolt, or you can manually aim in order to hit it while it flies sideways. The most important thing to watch out for is its aerial fireball attack. Watch the mouth closely, and if you see flame gathering there, prepare to roll. You'll want to roll early, as the area of effect created by the fireball may ignore your roll invincibility, so rolling early should carry you out of the explosive range without any need for invincibility frames. 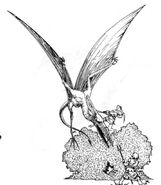 Dracolizard in {{WGW}} by Jarosław Musiał