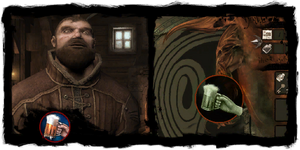 There are several opportunities (some might say necessities) for drinking contests in The Witcher. Geralt's stamina will be put to the test. These contests usually involve some goal, though what that goal is may not be clear on the onset. It is usually worthwhile, but it is recommended having either a place to sleep handy, or better still, Wives' Tears on hand for the aftermath.

Participate in drinking contests to gain information and rewards.

Retrieved from "https://witcher.fandom.com/wiki/Drinking_contest?oldid=483114"
Community content is available under CC-BY-SA unless otherwise noted.