Irredeemable criminals who end their lives in the waters of Lake Vizima become drowned dead (Polish: Topielec), a very dangerous variety of drowner. Fate refused them a chance to amend their ways and return to society, so they remain villains after death, drowning innocent citizens.

The drowned dead are creatures of the night; they appear on the banks of ponds, lakes and rivers

Immune to bleeding, blinding and poison attempts; they are fearless, immune to stun attempts and the Axii sign

Sensitive to silver and susceptible to knockdown attempts; the Fast Style is most efficient against the drowned dead; experienced witchers use the Group Style while fighting multiple drowned dead

These creatures poison their victims with cadaverine; they often attack as a group

Drowned dead return in The Witcher 2, however they are very rare and usually appear only at night near the site of Sabrina Glevissig's execution or near the bandit hideout. They are also classified as a subspecies of drowners. Drowned dead cease giving XP when killed from Level 15 onwards.

Drowned dead return in the third installment. They look largely the same in appearance with their counterparts in the second game and usually appear among five or more drowners.

They are found in Kaer Morhen valley, Novigrad, Skellige, and Velen. 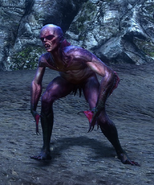 Drowned dead in The Witcher 2: Assassins of Kings

Render of drowned dead from TW2