Drowners inhabit both natural and artificial bodies of water, from rivers and lakes to mill ponds and city sewers. It is commonly thought that these creatures are drowned men, somehow arisen from the dead to prey on the living. This opinion is as widespread as it is false, for the beasts are in fact another post-Conjunction relic.

Drowners are among the first monsters to appear in The Witcher 2: Assassins of Kings. Geralt encounters some in the underground passages of the La Valette Castle on his way to the courtyard.

Sometimes a drowned man returns as a monster, to haunt the living. Tormented with his death, he murders his victims. He prefers to draw them beneath the water's surface, tearing the drowning victim to shreds with sharp claws, and eat them like a wet biscuit. Such creature is called a drowner. They are quite often found at the banks of the Pontar, since the huge river with regular shipping and riverside villages provides them with ample sustenance.

"When monsters are really crappy, ganging up makes them happy". Drowners are not the mightiest beasts in the world, so they hunt in groups, in accordance with the above saying. They are surprisingly fast on land, but are a threat only to fishermen and washerwomen. They can best a witcher only if he is drunk or in love. Sometimes, however, a more robust specimen is found among the drowners. It is called a drowned dead and can command the entire band. Thus it's best to eliminate it first.

One could say that if drowners chatted among themselves, Geralt would be highly esteemed among them after his exploits in Vizima. Yet drowners do not chat - they are dumb like a left shoe. And good. Fast style should be used when fighting them, and one must spin swiftly before they flee from a witcher's blade. Enough said.

As they are already dead, drowners do not fear poisons, and even a large loss of blood makes no impression on them. This ends the list of the monsters' strong points, however, as the rest of the witchers' arsenal is extremely effective against them. Thus the drowners can be killed with fire, immobilized by traps, knocked down and, above all else, sliced and diced until slime spills from their ears.

Developer CD Projekt's characterization of the drowner taken from the monsterbook, which was enclosed with the Collectors Edition of the computer game The Witcher for Poland, Hungary and the Czech Republic:

Skinny and humped, with its huge head, slightly protruding belly and concave chest, the drowner became a creature that is half-scary, half grotesque. Its eyes are round and fishlike, granting it a rather dumb expression. It also has wide palms and membranes between its fingers as well as a fin. Like its colour, these elements reveal much about its natural environment. This creature clearly lives underwater and is awkward when on dry land... unless it happens to be hungry and there is an unsuspecting traveller nearby.

Drowners are quite weak to Igni, susceptible to being lit afire and stunned while they screech in agony. When attacked by multiple drowners, it's possible to catch the pack in an Yrden trap, then blast the drowners with Igni. You can counterattack the claw swipes from a drowner, causing a bit of extra damage to them.

However, this can be quite difficult when multiple drowners are attacking. Not only do they usually attack in numbers, their attacks are quite fast and can have surprising range as they usually do leaping jump-strikes; above all else, don't let yourself get surrounded by them. They can interrupt your counterattacks with their own attacks. Drowners try to leap at a witcher from beneath the ground. Watch for disturbances at your feet, and roll or dodge to safety. Drowners react to the deaths of their fellows by screaming in pain. This show of mourning leaves them defenseless for several seconds. [1] 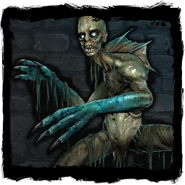 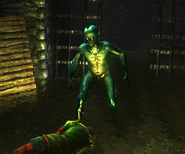