Dwarves are one of the humanoid races. Together with gnomes and elves they are called the Elder Races, and along with gnomes they were one of the oldest sentient races on the Continent. Dwarves are often excellent soldiers, artisans and businessmen. While they tend to be uncouth, they are also jolly and cheerful.

The motherland of dwarves is Mahakam. Like other nonhumans, dwarves are often persecuted by Nordlings. Because of that, some dwarves were members of the Scoia'tael guerrilla allied with Nilfgaard during the empire's invasion of the Northern Kingdoms. These dwarves distinguished themselves from their brethren by wearing their beards in plaits.

Dwarves are short and stocky, generally around the height of a human male's chest. They are more sturdy than humans, which makes them tougher and stronger, a key factor that makes them ruthless in combat. They usually grow long beards, which the women are also fully capable of growing.

Female dwarves have a reputation from humans to be extremely unattractive, and are generally only desired by male dwarves, despite the males believing otherwise and being very protective of their wives and daughters.[2]

Dwarves once, before humans arrived on the Continent, worshipped a diety similiar to Melitele, in that they worshipped a goddess of harvest and fertility.[3]

Dwarves generally wield axes in battle, though they are known to wield cutlasses, crossbows, bows, and martels (war-hammers)[2].

Their mountain fortifications are unparalleled engineering marvels. Thanks to a system of furnaces, boilers, and reinforced gutters, every passageway into the fortress can change into a deadly trap in the blink of an eye.[4] While mining and moving minerals in their many mines, foundries, forges, and ironworks, large carts are used by the dwarves as transport.[5]

Throughout the expansion of humans from the First Landing, dwarves have integrated into northern society, often peacefully living in large cities, such as Novigrad, or even small villages. As the racial prejudice grew on the Continent, in the years following 1263, many chose to join or aid the the newly created Scoia'tael, mixing with other nonhumans to eventually wipe out the human race.[2] For the violence shown from the Scoia'tael, the human hatred for the dwarves grew stronger, and they often faced persecution for simply existing, in the form of violent pogroms across the North around 1267 onwards.[5]

Dwarves arrived on the Continent between three to four-thousand years before the arrival of humans. The meeting between the dwarves and gnomes was peaceful, as the dwarves had no intention of invading and expanding.[4]

"Dwarves," Milva said under her breath. "But they aren't Scoia'tael. They don't have plaited beards."
There were six of them, dressed in short, hooded capes, shimmering with countless shades of grey and brown, the kind which were usually worn by dwarves in foul weather. Capes like that, as Geralt knew, had the quality of being totally waterproof, which was achieved by the impregnation of wood tar over many years, not to mention dust from the highway and the remains of greasy food. These practical garments passed from fathers to oldest sons, as a result they were used exclusively by mature dwarves. And a dwarf attains maturity when his beard reaches his waist, which usually occurs at the age of fifty-five.
pg. 75 Baptism of Fire (UK edition)

For a full list of known dwarves, see Category:Dwarves.

Dwarves are shorter than humans, but tougher and more muscular. Male dwarves wear long beards. They are usually gruff but can be merry, and are renowned for their stubbornness. Considered excellent craftsmen and warriors, many have earned grudging acceptance in human society. Still, it is not uncommon for young dwarves to join the Scoia'tael rebels to fight for more rights for non-humans and an end to persecution.

Dwarves are one of the Elder Races. They were once a dominant race, along with the elves, but now their sole enclave is Mahakam, a mountain-city rich in metal and mineral deposits. Of all the elder races, the dwarves have assimilated best and many now live in human cities. They run businesses and are often wealthy, although they meet with disdain and distrust. During the war with Nifgaard, dwarves made a name for themselves as mercenaries, although many of them also fought in Scoia'tael commando units against the Northern Kingdoms.

The book From the Annals of Mahakaman History provides a journal entry on dwarves.

Dwarves are one of the Elder Races. Stocky and bearded, with strongly built bodies and low voices, they are distinguished for their height, which is lower than human. Of simple and direct manners, they are sometimes seen as grumpy, unkind and greedy. I have to stress that my own opinion of the dwarfs is by no means similar to the latter part. I only cite it here to present the views of other people - even if they are dull-minded, hate-blinded buffoons. Mahakam is the dwarves' mountainous homeland, famed for it's numerous mines where precious stones and ores are mined. Many dwarves also live in human cities, for that race usually adapts to new neighbors easily, something that cannot be, unfortunately, said about a large part of humanity. Despite vexations, persecution, and even bloody pogroms, the coexistence with dwarves goes a lot better than with elves. Their flair for trade and craft makes them excellent merchants, bankers, smiths and armorers. 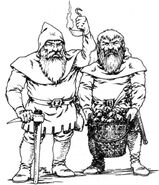