Immune to poison and bleeding attempts.

Massive blows with its heavy arms

Elemental stone
Amethyst dust
Diamond dust
Red meteorite ore
Yellow meteorite ore
Blue meteorite ore
Elemental trophy
There is an Earth elemental labeled as "golem" in the cave under the Kaedweni camp near the shore by the Nilfgaardian camp, in Chapter II. You can find it by exploring the caves while searching for Triss. Another one can be found in Kingslayers' hideout.

When it dies, it drops an Elemental stone and you can loot all the trunks and containers it guarded. In one of them, you can find the Armor of Ban Ard.

The earth elemental is the younger brother of the legendary d'ao, the genie capable of creating earthquakes and flattening mountains. Younger, and less powerful, but also more mischievous. Felling trees, crushing walls and smashing people to pulp can be counted among this creature's pranks. But only if their master allows it, of course.
The earth elemental always serves its summoner faithfully. It is most often employed as a guard, as it is tireless and always vigilant. It does have senses as living beings do, but it always recognizes the presence of intruders. It has no fear of monsters, let alone humans.
This monster's most dangerous weapons are its mighty arms. A blow from the earth elemental is akin to a battering ram hitting a city gate, and turns a normal human into a bloody stain. Its ripostes are especially dangerous, for this apparently sluggish creature can strike swiftly as well as strongly. Thus one has to defend oneself against its blows with all available means, including potions and Signs. According to the "fight fire with fire" rule – or rather the "fight strength with strength" – one should also use strong blows against the elemental, since only such attacks can grind its stone body down.
The earth elemental's body is solid rock, so the creature cannot be poisoned or blooded. It is best to summon a team of dwarven miners to use pickaxes on it until its done for. However if the witcher has no such team at hand, he should use regular means. The earth elemental, though it has no weaknesses, can be beaten.

How to survive an encounter with an earth element? Simple. Run. Fast as you can.
– Nino Murk, bounty hunter
Earth elementals are made of mud, clay, sand and rock dust clumped together with water and brought alive with magic. While seemingly slow and ponderous, these creatures are nevertheless dangerous and should be avoided at all costs.
Earth elementals can withstand a tremendous amount of punishment. Due to their enormous mass they are virtually impossible to knock off balance. They do not bleed nor feel any pain from poison or even fire.
They kill men with astonishing ease – whether by smashing them with their fists or hurling enormous stones at them. Their only weakness is their vulnerability to dimeritium dust – thus before combat one should prepare a full arsenal of bombs containing this ingredient.

Earth elementals are a test of strength and endurance. Even with a silver sword coated in elementa oil, earth elementals can resist impressive amounts of punishment before crumbling, while being able to dish out frighteningly powerful blows with their fists. Axii and Igni also have little effect, and Aard will only do a very brief stagger, if you're lucky. Also, against an elemental of equal or higher level than yours expect to have your silver sword go down to 0 durability during the fight even if you started at 100; note, the sword will still work, it just has reduced damage output.

Dimeritium Bombs make these elementals more susceptible to harm. They do not make them less dangerous. Strike once, twice if you judge it safe, then roll out of the way of an inevitable counterattack. Use heavy attacks for better damage output. You should be alert for elementals to raise a foot high off the ground. What follows is either a powerful ground stomp that sends a wave of rock piercing through the earth in a line before the elemental, or a shorter range cluster of them surrounding the elemental.

If an earth elemental jumps off the ground, move away as quickly as possible. The resulting shockwave knocks down any nearby victims and also creates a ring of rock around the both of you at a certain range, preventing you from escaping or getting too far away from the elemental. The rock ring disappears after about 15 seconds. The hammerblows delivered by an earth elemental's fist can be made easier to avoid by using Yrden. Also, if you see the elemental crouch down and cover itself with its arms, do not attack; it will be partially reflected back at you, staggering you or breaking Quen, and the elemental will soon slam its fist into the ground creating a shockwave.

Quen is definitely your best option against these. You'll be able to use an attack combo right through its slow, single, powerful attacks and put multiple hits on it before having to back off, then wait for it to recharge and repeat. The elemental is also slow enough that some of its attacks can be completely evaded by your quick, short-range Dodge allowing you to keep hitting until it finally catches you and breaks your Quen shield. You'll need it; these things take a ridiculous amount of damage to defeat.

Alternatively, if you do not wish to spam a Quen shield, then you should use quen, then switch to Aard. Aard is quite useful to stop the elemental in its tracks, it is a small stagger, but it will stop it from attacking, and the stagger can be used to the player's advantage, to start up a whirl attack or perhaps get a heavy attack or two. 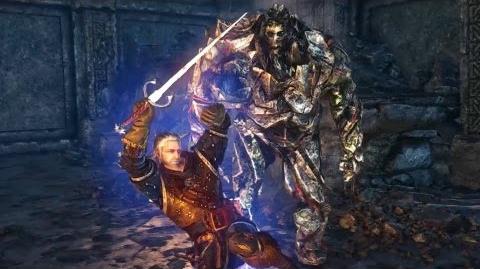 Earth elemental in The Witcher 2

Geralt and Yennefer against earth elemental