Deceased (shot in the left eye during the Battle of Marnadal)

King of Cintra
King of the Skellige Isles

The Hexer
Netflix's The Witcher

Eist Tuirseach was the Jarl of Skellige who became the King of Cintra via his marriage with Queen Calanthe in 1252. By 1257, Eist had obtained the crown of Skellige, succeeding his brother Bran Tuirseach. The position of jarl was then passed onto Crach an Craite, Eist's nephew whom he mentored. Eist was reputed to be an extraordinary warrior and sailor who had disdained marriage until laying eyes upon the Lioness of Cintra.

When the Nilfgaardian Empire invaded in 1263, he bravely led the defense until perishing in the Battle of Marnadal. Hearing of the carnage and the death of his uncle, Crach declined to sign a truce with Nilfgaard and swore bloody revenge on them.

Descent and life of adventure

Born into Clan Tuirseach,[4] Eist had one brother, Bran, and a sister who ended up giving birth to Crach an Craite.[2]

In time, Eist Tuirseach became a renowned seaman who had seen a sea serpent and a narwhal,[5] could maneuver a ship in narrowest fjords, navigate the fiercest gales at full sail and drive opponent's ships twice as big straight into rocky coastlines.[1] These skills had saw him earn the rank of the jarl of Skellige–the commander of the armed forces–rendering him the mightiest individual on the Isles.[6]

Not long after the death of King Roegner of Ebbing, Queen Calanthe's husband, Eist had begun visiting the royal castle in Cintra. They developed deep feelings for one another and made promises which etched themselves deeply in Tuirseach's memory.[2] Nevertheless, the Queen refused Eist's proposals[6] three times.[3]

In 1252, Eist, joined by skald Draig Bon-Dhu and druid Mousesack, accompanied young Crach on a voyage to Cintra, where a feast was held to celebrate Princess Pavetta's coming of age. The chief aim of the islanders was to ensure Crach's wedding with Queen Calanthe's daughter and heiress, thereby allying Skellige with Cintra. He was seated near the Queen.

Throughout the feast, Eist did his best to keep Crach's temper down in front of other suitors from near and far, such as Prince Windhalm of Attre, Baron Eylembert of Tigg and Ravix of Fourhorn. Being secretly in love with Queen Calanthe, Eist couldn't help but notice her talking at length with enigmatic Ravix, not realizing he was Geralt of Rivia and they were discussing witcher business. Tuirseach went as far as to politely warn the Queen that Pavetta should be brought before guests sooner rather than later, before Crach gets drunk beyond measure. A while later, he started to look annoyed, which didn't go unseen by the Queen who joined Tuirseach, Mousesack and Marshal Vissegerd a few minutes later.

As the banquet was in full swing, the feast was disrupted by a knight who introduced himself as Duny, Urcheon of Erlenwald. He claimed Pavetta was his reward through the Law of Surprise for saving King Roegner fifteen years ago. After it was revealed that he had a hedgehog-like head, Calanthe asked her daughter if she wanted to leave with such a beast, assuming she'd say no, but the Princess answered yes. This outraged the guests and a fight broke out. Eist, acknowledging that Duny was right, grabbed a chair and fought beside him. All the commotion upset Pavetta, causing The Force to burst from her, sending furniture and suitors flying.

Amidst it all, the throne with Calanthe flew and smashed against the opposite wall, knocking her unconscious. Eist cried out her name and, barely on his feet, leaped to the Queen to protect her. During the chaos, Eist, who had once more declared his love to Calanthe, proposed to her. Before she could react, Geralt and Mousesack were able to bring Pavetta back to her senses and the Queen demanded to talk to everyone involved. Resolving the matter of her daughter, Calanthe realized Pavetta was in love and agreed to let them get married, therefore unknowingly breaking Duny's curse. She then told Duny he wouldn't be a king yet. Tuirseach, who began catching on the meaning of it all, sighed the Queen's name to which she responded "Yes, Eist, I accept", moved by his proposal.[2]

Not being one to hesitate, Queen Calanthe arranged for the wedding to happen that very night[3] just after Pavetta and Duny had made their own vows to each other.[7]

Reign over Cintra and Skellige

Shocked by the events of the banquet and the fact their Princess married "stray Urcheon" whose lineage couldn't be verified, Cintrans accepted Eist as their king.[8] A few years later, before 1257, Eist had become the king of Skellige, even if in name only. The full power had been held by his former ward Crach, who had ascended to the post of the jarl of Skellige after Eist's coronation.[6]

Moreover, Eist found royal duties boring. Having an immense deal of respect for his wife, he had handed over his authority wholesale to her[8] and continued to spend most time away.[9] In their chamber, Calanthe had stuffed herself with all sorts of medicaments and dragged Eist into bed almost nonstop to get pregnant, but to no avail.[8] Though he loved her beyond measure, some believed Eist himself wasn't sure about mixing Skelligan fiery nature with the Elder Blood.[1]

When one tragic day, Princess Pavetta and her husband didn't manage to return to Cintra and their ship disappeared, Eist promptly began searching for its wreck or at least the pairs' washed-up remains. He searched for two days without a break, all while Calanthe was furious at him and Jarl Crach for permitting Pavetta and Duny to go out to sea. Finding nothing, Eist returned to Kaer Trolde citadel where a mourning feast was held.[5]

Eist then became a sort of father figure for Pavetta's daughter, Princess Cirilla. During stately matters that they both found dull, such as knighting ceremonies and banquets, Eist usually cracked jokes to lift her mood. He also taught Ciri a couple of knucklebones tricks she had used when playing with her friends.[3]

Over ten years had passed since his wedding when the Nilfgaardian Army marched through Marnadal Stairs. King Eist joined his wife once more to face them, standing in charge of an army composed of Cintrans and Skelligers alike.[5]

The Battle of Marnadal lasted an entire day.[9] As it raged all around the royal pair, Queen Calanthe asked Eist whether the reinforcements of fifty Skelligen ships would arrive soon, to which he replied there was a storm but that they shall not surrender. Eist then turned to face more invaders[3] but was shot with an arrow through his eye, instantly killing him[6]

Although grief-stricken by his death, the Queen managed to round remaining forces and retreat to Cintra, but was subsequently defeated in what became the infamous Slaughter of Cintra.[9]

Eist's body was retrieved from the fields of Marnadal by his countrymen and brought back to the Isles. He was buried in a traditional stone tomb next to an empty, symbolic coffin for his wife as her body was never found.[6]

Following a brief interregnum,[10] Bran had been reinstated as Skelligan king[4] and Jarl Crach vowed to take bloody vengeance on the Nilfgaardians for killing Eist, earning the nom-de-guerre Wild Boar of the Sea and shaping the Empire's adamant foes out of islanders.[5] King Tuirseach's name became a part of warcry "For Eist!", used by the Skelligan warriors when rushing against the Black Ones.[11]

A sinewy warrior with a dark face, aquiline nose, and dazzling white teeth, Eist was widely regarded as handsome. He was noble, righteous and possessing qualities of an ideal knight. An example of this is when Princess Pavetta sat next to him and Eist straightaway poured her a drink and entertained her with a conversation. When it came to tutoring Crach, however, Eist knew full well when to show a clenched fist and calm down his temperamental nephew.[2] Ciri remembered Eist as clever.[5]

Just as he was handy with a blade, Eist was considered good with the women as well.[3] So much, in fact, that a story existed according to which it only took one look from the swarthy adventurer to soften the "icy heart" of Queen Calanthe.[1]

Eist is a leader in the Homecoming version.

Scroll 1: Eist looked different than the other islanders. His hair dark, his skin markedly aged and weathered by the sun – he stood out in a crowd. His appearance, it seemed, paralled a certain longing, for he often looked upon the horizon, his gaze distant, giving the sense that his thoughts were lost somewhere far beyond Skellige's shores...
Scroll 2: Eventually, Eist did leave his homeland to settle in Cintra at the side of the illustrious Queen Calanthe. They say one look from the swarthy pirate was enough to melt the queen's icy heart...
Scroll 3: Although Eist loved Calanthe beyond measure, he was never truly happy in Cintra. He could not shake the lingering feeling that catastrophe awaited him, that a tragic fate had been written for him in the stars...
Scroll 4: Indeed, several years following their wedding, Nilfgaard attacked Cintra. Eist fought the invaders with the fury of a sea devil, but eventually fell, pierced by an arrow. The Skellige Isles, his homeland, now serve as his final resting place. He lies there alone, for Calanthe's body was never found.
Chest 1: Eist Tuirseach and Calanthe never bore children. Some claimed that the Lioness of Cintra – for whom this was her second marriage – was incapable of granting an heir due to her advanced age. However, those closest to Eist knew better. The islander never wished to father a child – not after witnessing what power resided within Calanthe's daughter, Pavetta. In the veins of Cintrian royalty flowed the Elder Blood, which he believed would not mix well with the hot temper so characteristic of Skelligers.
Chest 2: Eist became renowned on the Isles for his skills as a sailor. He could maneuver a longship through Skellige's narrowest fjords on a moonless night, navigate the fiercest storms at full sail, and drive Nilfgaardian ships more than twice the size of his own onto the islands' jagged, rocky coastlines. Who knows what new and exotic lands he might have discovered had he not planted his roots in Cintra...
Chest 3: To ensure his ship never deviated from its course, Eist often closely observed the stars. Yet one night – lying on the deck of his longship, hands clasped behind his head – he eyed something more than just a map etched in sky. He saw something that turned the good-humored, carefree adventurer in him into a grim and somber man. Whenever asked what he saw in the stars that night, Eist merely replied... "The future." 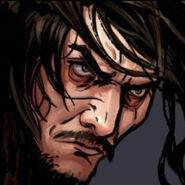 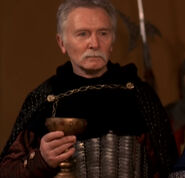 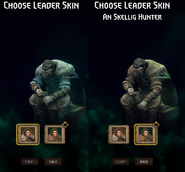 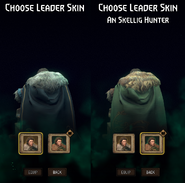