Witcher Wiki
Register
Don't have an account?
Sign In
Advertisement
in: Brokilonians, The Hexer characters, Dryads,
and 5 more
English

View source
watch 02:17
New Pokemon Games - The Loop
Do you like this video?
Play Sound
Sub-Pages:

Lady of Brokilon
The Silver-Eyed

Eithné, known as the Silver-Eyed,[3] was the queen of the dryads and ruler of Brokilon. She was famous for her wisdom and implacable stance towards humans. Their attempts to claim the ancient forest for its trees and supposed treasures have fostered centuries of conflict. In addition to being loathed by King Viraxas of Kerack, she and King Ervyll of Verden share a mutual hatred of each other.

She has a "daughter" called Morénn.

Even mortal enemies sometimes find common cause and make fragile pacts. Yet not Eithné, no. The queen of the dryads' hatred for humans is absolute, brooking no exceptions. Not matter how they plead, beg or threaten, she always gives them the same answer - an arrow to the head.

Brokilon is no common wood. This ancient entitlement of trees hums with magic, a primal energy pulsing from its soft breezes and babbling brooks. The dryads have learned draw on this, taking from it strength far beyond that of any man or elf.

Dryads are distrustful by nature and avoid all outsiders. They only make exceptions for elves, with whom they will join forces when outnumbered. In such cases, the enemy's numerical superiority quickly counts for very little. All those not cut down by elven blades succumb to powerful dryadic spells.

The waters of Brokilon are famed for their extraordinary properties. People who drink of them lose their memory and dryads are said to see visions of the future in their smooth surfaces. No wonder, then, that their armies seem prepared for every eventuality...

Eithné of Brokilon was one of the playable heroes in the now defunct MOBA and had a lot of interesting weapons, skills, and skins. She was an archer class hero.

The Queen of dryads would never side with humans if not for the prize that the Emperor offers. When independence and peace are at stake, it's worth bending both your head and your personal standards. Like all other dryads, Eithne is a master archer, who, aside from normal melee attacks, can damage her opponents from afar with devastating ranged skills. This hero is also a really powerful crowd controller. Eithne's passive skill, Dryad's Sight, makes her shots stronger when the enemies are at least 5,5 meters away.
Thorned Dagger is Eithne's bread and butter ability. It's a high damage, moderately low cooldown skill, that she can use both as an opener to start a fight, or as a way of finishing off fleeing enemies. It works really well in combination with the dryad's second skill - Path of Thorns.
Path of Thorns is a unique skill that you can literally draw on the screen. Moving your finger on the screen will leave a trail that will produce vines that entrap and damage all enemies in range. This skill is very useful in multiple situations - while engaging, chasing or just to finishing off an opponent. It's also a perfect setup for Eithne's other skills, as it makes aiming much easier.
Piercing Arrow is a skill that's hard to master properly. After 1.5 seconds of delay Eithne releases a powerful shot that travels 30 meters, damaging and displacing all the enemies on its path. It has the longest range of all the skills that are currently implemented in the game.[4]

Eithné is a leader in the Homecoming version.

Scroll 1: Even sworn enemies sometimes negotiate, perhaps in the hope of establishing a comromise or truce. But never Eithné, Queen of the Dryads. Her hatred toward humans is unwavering. To their bargains, pleas, cries, threats, her answer is always the same – a well-aimed arrow between the eyes.
Scroll 2: Under Eithné's leadership, humans are never permitted to enter the forests of Brokilon. Well... Almost never. After all, even dryads must procreate somehow.
Scroll 3: For this reason, dryads will kidnap human girls and, occasionally, men in their prime. Their role in dryad society is easy to guess. However, they are then forever banished from the forest once their "duty" is fulfilled... Despite their impassioned pleas to stay.
Scroll 4: Girls who are brought in to swell the dryads' ranks are made to drink from a source known as the Water of Brokilon. It sharpens their senses, strengthens their bodies... And rids them of their memories.
Chest 1: Dryads possess a power allowing them to influence plants to grow in any shape. In this way they construct their fortifications, homes, and palaces. The process is slow, sometimes lasting centuries... Fortunately, dryads are a patient bunch.
Chest 2: The most gifted dryads are able to push this ability further, to create new life-forms from plants, capable of movement... Even rudimentary thought. These beings are known as treants. Few have laid eyes upon them – knowingly, at least. In a dense forest, they are near impossible to spot... And even more difficult to escape.
Chest 3: From time to time, the human leaders of the realms that border Brokilon – Verden, Cidaris, and Temeria – once again resolve to set ablaze the primeval forest and the dryads who dwell within. Up to the wood's edge they transport barrels of tar and straw. However, they are typically abandoned with haste after the first volley of silent arrows is released from behind the wall of trees. 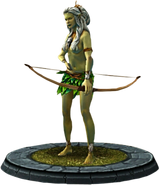 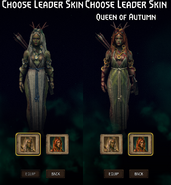 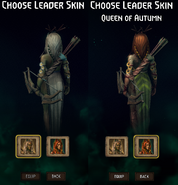