You can get a bestiary entry from reading My Evening with a Vampire.

Bah, ain't nothing to fear. Ekimmaras, why, they ain't nothing more than overgrown bats.
– Anonymous city guardsman's last words
Like other vampires, ekimmaras are not, despite what village gossips might say, undead humans. They are instead post-Conjunction monsters who have no particular feelings about garlic, holy water or religious symbols.
Unlike their portrayals in ballads and legends, they look nothing like handsome, pale aristocrats with charming eastern accents, though, like katakans and nekurats, they do bear a strong resemblance to overgrown bats. They also do not suck blood from the necks of virgins with a delicate, kiss-like bite – they tear them to shreds using long, sharp claws and then slurp the splattered blood off the ground.
Ekimmaras are unusually cruel and exceptionally swift. They are able to quickly land blow after blow capable of smashing even the best Mahakaman-made armor into tiny shards. They should be fought with a silver sword, remembering that they can regenerate back health over time. One should thus never attempt to tire them out or, gods forbid, wait for it to bleed to death. Instead, cut then down as quickly as possible and, if possible, burn the body to ash and scatter it to the four winds.

Ekimmaras are especially dangerous foes due to their ability to regenerate. They can even outlast a witcher using the finest potions. Black Blood potions are an effective way to weaken an ekimmara. If you are stricken by their claws, you will bleed profusely.

That blood can harm the ekimmara and knock it back, allowing you a brief respite from its assault. Dodging is essential when fighting ekimmaras. Their claws cannot be parried, and even if Black Blood is an available witcher brew, it is best to avoid being wounded altogether, if you can help it. 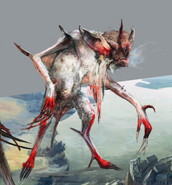