Around 300-400 for Aen Seidhe; at least one known representative from Aen Elle who has reached 650

Elves are one of the humanoid races that inhabit the Continent. Forming a major part of the Elder Races (along with dwarves and gnomes), those known as Aen Seidhe came to the Continent on their white ships much earlier than humans, but later than the other Elder Races. They live much longer than humans and are usually very attractive.

Elves are capable of interbreeding with humans (thus producing half-elves and quarter-elves) and dryads. Though elves are incredibly long lived, only young elves are fertile, thus elven populations tend to reproduce at a slower rate than humans.[5]

Like other nonhumans, elves are often persecuted by Nordlings. Because of that, many elves were members of the Scoia'tael guerrillas allied with Nilfgaard during the empire's second invasion of the Northern Kingdoms. In return, Emperor Emhyr var Emreis gave the elves a state of their own in Dol Blathanna and made Enid an Gleanna its queen.

Elves believe that they were created, unlike humans, who evolved. For this reason, some elves consider humans to be little more than hairless apes. Aside from Aen Seidhe, there exists another group of elves called Aen Elle that inhabits another world.

Characteristic features of elves include pointed ears and small, identical teeth without cuspids (canine teeth). Elves tend to be very tall and lean, and due to their longevity often appear youthful. Elves are often considered attractive by humans. Like humans, Elves choose to wear a variety of different clothing styles, although Scoia'tael are known to favor furs and hides, particularly those of squirrels and other forest dwelling creatures.[5]

The elven culture places an emphasis on naturalism and living in harmony with the land, rather than bending it to one's will. Urban elves tend to be very scholarly or artistic, but can take up a variety of professions just like humans. Rural elves that do not live amongst humans live a somewhat simpler lifestyle, hunting, gathering, and living off the land as needed. In battle, elven warriors favor bows and metal swords, as well as light armor made out of furs and hides. They tend to be skilled at sword fighting from horseback.[5]

Most elves speak Elder Speech, the traditional language of the Aen Seidhe. Almost all elves have at least a rudimentary familiarity with Common Speech, but many, particularly city dwelling elves speak the common tongue just as well as any other human.

It appears many elven clans in the North have a tradition of hunting and gathering, as elves of Dol Blathanna are unfamiliar with agriculture and concepts such as crop rotation.[6] Though many now are destroyed, elves were once capable of making great cities and palaces out of stone, but they did not make castles or fortresses.[5] However, by the time of the Witcher series many of these settlements have long been destroyed or occupied and altered by humans.[5] Elven bows are renowned for their light weight and ease of use, and experienced hunters often favor them over human bows. A style of Elven bow known as a zhefar is shorter in arc length and formed from a composite of wood and animal sinew. The human hunter Milva claimed that though lighter than human yew bows, zhefars will launch an arrow at a higher velocity and with a reduced spread of accuracy.[7]

Elves created magnificent towns and palaces before the arrival of humans to the continent, destroying many of them following conflicts, as they did not wish for elven architecture to fall into the hands of humans.[8] Many modern human cities including Novigrad, Oxenfurt, Vizima, Tretogor, Maribor, Cidaris, and the city of Cintra are built on the ground of destroyed elven cities.[5][8] Many elves and half elves have managed to integrate into human society but are still faced with prejudice on a day-to-day basis. Others have chosen to live in the wilds in secluded clans, living off the land and avoiding all contact with humans if possible.

Elves once, before humans arrived on the Continent, worshipped a deity similiar to Melitele, in that they worshipped a goddess of harvest and fertility.[6]

Elves travelled to the Continent on their white ships approximately two-and-a-half thousand years before the arrival of humans, most likely from another world travelled from by a portal. For a thousand years, the elves colonized much of the Continent, mostly through peaceful means, though they did clash with several races, such as vrans, werebbubbs and dwarves, taking control of the vrani city of Loc Muinne.[8]

By the time of the First Landing and the arrival of humans on the Continent, elves mistook their intentions and underestimated the threat of human colonisation. As they continued to refuse to commit to a human-elven war, fearing thousands of casualties, they chose to keep fleeing to the east, hoping that the invaders would eventually stop expanding. In the process they abandoned many of their own cities. Eventually, a peace treaty was signed amongst the humans and elves, although this was broken just a few years later when Redanian forces, led by Milan Raupenneck, attacked and slaughtered the inhabitants of Loc Muinne. Thus, the second elven-human war started, which quickly resulted in an elven defeat and their retreat further east, a blow from which their race has never managed to recover.[8]

Many years later, another peace treaty was signed with the weary elves, which allowed them to live in the mountains without attack from humans, provided they submitted to human rule. This remained their fate for several years, until about two hundred years ago. This fragile peace was broken when Aelirenn led her people, against the wishes of their elders, towards a suicidal battle against the humans. This revolt resulted in the death of Aelirenn and all of her warriors.[8]

For a complete list of known elves, see Category:Elves.

Elves
After gnomes, elves are the eldest race on the continent. They created a magnificent civilization and the greatest human cities, like Vizima and Oxenfurt, were built upon elven ruins. Elves also have a special affinity for magic, although their magic is different from that of humans.
Elves are long-lived, yet the reproductive period of their lives ends quite early and, moreover, they reproduce much more slowly than humans. This is why they were defeated, the reason why they lost their re-eminence in the world. Today, only two enclaves of the race remain: the Blue Mountains, where elves suffer privation and are dying out, and Dol Blathanna, the Valley of the Flowers, which is ruled by the sorceress Enid an Gleanna. The Valley of the Flowers is a dependency of Nifgaard.
Elves are a beautiful and long-lived race. They have pointed ears, sharp features, and possess no canine teeth. Elves are arrogant and proud, and over many centuries they have developed a high and sophisticated culture. Few remain today, however, and these are in constant conflict with human civilization. That is why so many younger elves, eager to fight for their rights, join Scoia'tael commando units.
Elves don't discuss their faith in the presence of humans, because they think the barbarians would be unable to grasp its philosophical and mystical subtleties. Most humans, on the other hand, don't care about elven beliefs. It is a fact that some elves believe in Dana Méadbh, the mother goddess, who seems to be an embodiment of the goddess Melitele.
Humans have their own version of the legend of Lara Dorren and Cragen of Lod, which differs greatly from that of the elves. An elf and a human came together just after the Conjunction of the Spheres and the rise of the human race. The legendary lovers became a symbol of the peaceful co-existence of the two races until some elves, jealous of Lara's attentions, treacherously killed 'the barbarian' who had dared to get involved with their kinswoman. In the human version, Lara is portrayed as a witch. Cregan's death resulted in much treachery and scheming, and thus the hostility which exists today between the races is the elves' fault.
The elves tell the story of Lara Dorren and Cregan of Lod, an elven sorceress and a human wizard, as the tale of the legendary lovers who formed the first union between the two races. Elves claim this relationship proved that peaceful co-existence between the races was possible, at least until humans treacherously killed the wizard and banished Lara. Thus, according to the elves, human hostility, possessiveness, and aggression were first demonstrated. These 'barbarian' qualities make co-existence with humans impossible, so the lovers' tragic end triggered a war that continues to this day.

Elves, or Aen Seidhe, as they call themselves, are a folk known for their beauty and longevity. Their sages, scholars, and artists were at the fore of their fields, creating real, breathtaking masterpieces. The glory of this Elder Race is long gone, however. After a series of bloody conflicts with humans, their cities were ruined, and the elves themselves were forced to retreat to the east, into unapproachable mountains, or to recognize human domination and accept their lot. Years of wars, persecution, and mutual enmity created a rift between our races. Many elves saw a chance of winning freedom in the last war against Nilfgaard, so they took up arms, creating the partisan groups of Scoia'tael. Though they managed to secure the creation of the partially independent realm of Dol Blathanna, some feel they were deceived and still wage war on humans.

This event allows to unlock the lore on elves and a cardback with elvish symbol.

Scroll 1: The Aen Seidhe, the People of the Hills. Traces of their magnificence remain visible to this day. Palace ruins still hidden in dense forests, mysterious towers standing atop mountain peaks, sculptures carved from marble white as fresh snow. But the elves themselves? Their numbers continue to dwindle.
Scroll 2: Their decline rests in the fact that, although the Aen Seidhe surpass humans in longevity, magical aptitude, and knowledge of the natural world, they are at a disadvantage in one important regard – fertility.
Scroll 3: Although elves can live for centuries, they can only conceive children during their youngest years. Even then, only one out of every two or three couples will successfully bear a child. Humans, on the other hand – well... They seem to have mastered the process.
Scroll 4: Consequently, though the elves had at first defeated the humans time and time again, they quickly realized that ultimate victory would prove impossible. For whenever they killed one man, another five stood ready to take his place.
Chest 1: Many Nordlings believe that the roots of the Nilfgaardian people extend far back to an elven tribe sometimes referred to as the Black Seidhe. This would explain much. After all, their language is derived from Elder Speech, the Empire is far more developed than the North, and they treat non-humans with much less hostility... However, the truth behind such characteristics is rather different. Whereas the people of the south simply chose to adopt some of the elves' best traits, the people of the north opted for slaughter. 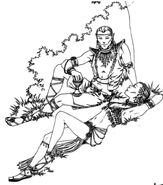 Toruviel, a female elf in The Hexer TV series 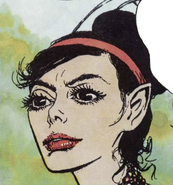 Aideen, a female elf in the Zdrada graphic novel

Dara, young elf in Netflix's The Witcher
Add a photo to this gallery

Retrieved from "https://witcher.fandom.com/wiki/Elf?oldid=538233"
Community content is available under CC-BY-SA unless otherwise noted.