There are many elven ruins on the continent. Later, humans built their own cities on those ruins, much to the disgust of the elves. So much so that the elves began sacking their own cities as they left them rather than leaving them to be contaminated by humans. 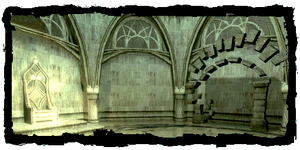 As Vizima was built on elven foundations, the sewers of the Trade Quarter not only boast the usual complement of monsters, but also the ruins of an ancient elven temple.

There are ruined elven baths near Flotsam.

Retrieved from "https://witcher.fandom.com/wiki/Elven_ruins?oldid=426777"
Community content is available under CC-BY-SA unless otherwise noted.