Enter the Dragon is a quest from Chapter 3 in The Witcher 2: Assassins of Kings.

After the meeting, a dragon will show up and Geralt will have to go up the tower to defeat it. As Geralt ascends the tower, he can hear Síle's voice, taunting him. Once he reaches the top, Síle in in the center of a megascope, preparing to flee. She tells Geralt her and the Lodge's role in assassinating Demavend, but that they were not involved in Foltest's death, and that Letho was really working for Nilfgaard. She says when she teleports away, the dragon will burn Loc Muinne to the ground. However, when she tries to flee, the teleportation spell begins to act strangely. Síle notices the diamond on her megascope was replaced with a flawed one, and begs Geralt to remove it. Geralt will either leave it in place, causing her to be torn apart or remove it, saving Síle. (For consequences of this choice, see The Decision Checklist.)

Either way, Geralt will have to face the dragon seconds after his confrontation with the mage. The battle takes him to the top of the tower, where he mounts the dragon and the two fly out of the city. Trying to shake Geralt off, Geralt forces it to crash land and have the dragon impaled by tree where he left with a decision to spare or kill it.

Geralt ran for Síle de Tansarville as fast as his legs would carry him. He could hear the sorceress' voice in his head, and the more she said, the more he wanted to silence her. Yet Síle held one more trump card - the dragon.
If Geralt choses to kill the dragon:

Defeating the dragon was one of Geralt's greatest feats. It was a difficult fight, even the slightest mistake could have meant instant death. Yet an ever harder task now awaited the bruised and fatigued witcher - he has to settle things with Letho.

If Geralt choses not to kill the dragon:

Geralt spared the dragon's life, or perhaps I should say he spared Saskia, even though the sorceresses may have still had a hold on her mind. In any case, it all played out in agreement with the witcher's code (and it matters little if this code is a fiction or not), which forbids the slaying of sapient beasts. The dragon was not Geralt's true enemy - unlike Letho. It was him that Geralt had a score to settle.

Tips on Fighting the Dragon 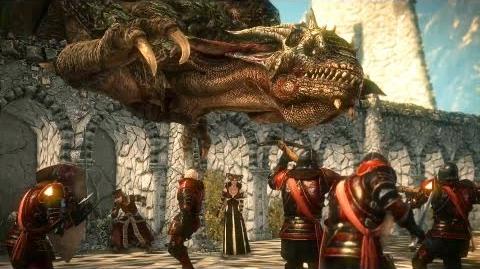 Retrieved from "https://witcher.fandom.com/wiki/Enter_the_Dragon?oldid=501937"
Community content is available under CC-BY-SA unless otherwise noted.