< Eskel
Edit
watch 02:46
The Quarry - The Loop
Do you like this video?
Play Sound
Sub-Pages:

Eskel was a witcher of the School of the Wolf tutored and trained by Vesemir at Kaer Morhen. He was a dear friend to Geralt of Rivia.[1]

Eskel arrived at Kaer Morhen as a child, at the same time as Geralt, Lambert, and Remus.[2] The group was trained under Vesemir and underwent the Trial of the Grasses successfully, but soon after Kaer Morhen was attacked by an angry mob of both people and monsters in 1165. However, thanks to Illyana Zerbst and Geralt's snooping, the children managed to escape outside and away from the keep. Vesemir, the sole witcher to survive the massacre, soon found the tired out children and took them under his wing to care and train.

Over the years, Eskel and Geralt developed a strong friendship and considered each other brothers.[3] At one point during their training, Eskel and Geralt had captured a huge bumblebee and tied it to a jug. Watching its antics, the two had fits of laughter until Vesemir had caught and punished them with a leather strap.

In the winter of 1264, as Eskel made his way back to Kaer Morhen, he got into a fight with an odd leshy somewhere in Kaedwen. The fight lasted for six hours before Eskel finally got the better of the wooden beast. While he couldn't kill it, having lost all his elixirs, he did manage to cripple it and leave with its hand, though not without his own injuries from the monster.

When Eskel arrived at Kaer Morhen he greeted Geralt and the other witchers. Then, he went on to tell his tale with the leshy, but displayed suspicion about its nature. Vesemir then reminded him how a leshy is only killed by fire through the heart. It was only then that he noticed Ciri. Eskel continued to behave hostile and bullish towards Ciri as well as Geralt, contrary to his joyous nature. Later that day, Eskel brought a few prostitutes up to Kaer Morhen, violating its secrecy and status, again contrary to his nature. He continued to party with other witchers, which Geralt condemned. As he confronted them, Eskel tried to attack Geralt and was immediately subdued and sent away.[1]

Infected by the Leshy[]

Unknown to Eskel, one of the injuries he'd substained was infecting him and gradually turned him into a leshy, and came out in full force, subsequently killing an accompanying prostitute. Having caused the whole keep to shake from his transformed state, all the witchers went on high alert and Geralt arrived at the laboratory to be attacked by Eskel in leshy form. Geralt started to fight the leshy, but stopped when he realized it was Eskel. Eskel then explained how he tried to fight the transformation but couldn't, and asked for Geralt's help. The leshy got a hold of Geralt, until Vesemir arrived and threw an axe to his chest, after which he backed away to the ceiling.

Geralt explained Eskel's infection to Vesemir as he cut him loose. The leshy tried to escape through the door, but Geralt rushed to trace Yrden on the doorway, only to be pushed aside. Vesemir took the opportunity to throw a hook into Eskel's leshen body to restrain him, and Geralt did the same. Vesemir approached Eskel and tried to calm him explaining he could cure him, but Eskel, overtaken by the infection, strangled Vesemir. Having no other choice to save Vesemir, Geralt gathered his will and cast the Igni on his sword to light it on fire, and drove the sword through Eskel's back in a mercy kill.

Vesemir ripped Eskel's medallion out of his lifeless, mutated body and assured Geralt of his actions. The witchers all gathered at the medallion tree to pay respects to Eskel as Vesemir placed the medallion on the tree. Later on, Geralt found Vesemir dissecting Eskel's body in the laboratory, and suggested he deserved to have his rest. The two of them carried his body to a cave to let it be devoured by wolves.[1] 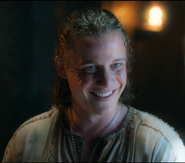