Witcher Wiki
Register
Don't have an account?
Sign In
Advertisement
in: Organizations, Deities, Church of the Eternal Fire
English

View source
watch 09:07
The Church Of The Eternal Fire History - Witcher Lore - Witcher 3 lore - Witcher Religions
Do you like this video?
Play Sound

The light that illuminates the darkness, endurance, progression and innovativeness, hope for a better tomorrow

Great Temple of the Eternal Fire in Novigrad, a few churches and shrines in Northern Kingdoms

Eternal Flame
Eternal Fire is a religious cult that had many followers among humans of the Northern Kingdoms. It was founded in Novigrad, where it was practically law, and the city served as the religion's de facto capital. The cult is led by an elected Hierarch, who's chosen by the Electoral College, with the seat currently being occupied by Cyrus Engelkind Hemmelfart.

The cult's greatest temple was the Novigradian Grand Picket.

By 1272, the cult had grown in popularity to the point it was declared as the Church of the Eternal Fire. While it had no official acting army or military body, the Order of the Flaming Rose and witch hunters defended the Eternal Fire and upheld its laws, while the temple guards patrolled and protected the Grand Picket in Novigrad.

According to a legend, when the first human colonists were visiting the abandoned town, they saw a strange glow emanating from one of the palaces. Inside they met an individual sitting near the great bowl of fire. Being asked about his personality, answered: I guard the Eternal Fire; as long as it will flame in this place, so long this city and your kin will endure - and then he disappeared.

The astonished humans discerned, a divine sign in that incident and designated some men to keep an eye on the fire. The Kreve's missionaries who came later acknowledged that the town had been blessed by the presence of their god, and helped in organize the church on the model of their cult.

Novigrad was the area's only brick town, so lots of people were coming to settle down. Some of them traded, others dabbled in craft. With time non-humans also came. They didn't use to incommode priests due to not causing harm to a city, paying taxes and sometimes even worshipping the Fire. Only the druids have been disliked, who are accusing Novigrad of making the river polluted.

The priests are strongly against using magic, as it shouldn't sully the place where the Eternal Fire flames. Sorcery is considered as a blasphemy, excluding the ones who have obtained an official permission or trade imported magical items.

Eternal Fire is a symbol of hope, enduring the misfortune, light pointing the way in darkness, heralding progress and a better tomorrow. Holy flame guards the city from the forces of evil that could threaten its citizens; everyone believes that any monster could break within the walls and undermining this belief is considered to be a blasphemy since it is questioning the power of the Eternal Fire. One must admit that it protects extremely effectively indeed, though there is no longer against whom since the Novigradian priests had enthusiastically eradicated all creatures which could be considered as "monsters".

In the game, Geralt first encounters the cult of the Eternal Fire as personified by the Reverend in the Outskirts. Not the finest of introductions, but the Reverend is only one of many preachers.

Other people the witcher meets in his travels may or may not belong to the cult. Other religions are also portrayed. Druids, followers of Melitele, the Lady of the Lake and nonhumans in particular do not adhere to that faith. Our hero also meets worshippers of the Water Lords and of Dagon.

The cult of the Eternal Fire is a very aggressive faith which fights against all abnormal beings such as nonhumans, witches and, of course, beasts. Occasionally, even witchers aren't welcome in cities that believe in the Eternal Fire.

The cult has been elevated to the status of Church of the Eternal Fire and its practitioners run the city of Novigrad. 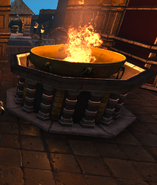 Great Temple of the Eternal Fire in Novigrad

Keeper of the flame