There are several useful files in the \The Witcher 2\CookedPC folder such as "en0.w2strings, fr0.w2strings, zh0.w2strings, de0.w2strings..." these files contain all of the text, journal, dialogue, quest, character, attribute, skill entries. The first 2 letters of the filenames indicate the language version.

To extract the information, first off use Gibbed Red Tools to decode them then view/edit them with a .xml editor such as Notepad++. It's easy, but the file structure is a little different than a simple .xml file.

For images, the extracted files are mostly in the globals\gui\icons\items folder, in .dds format, so a program which can open this format and convert them to .png is useful. One such free program is GIMP.

First off let's take a look at basic file types:

In order to unpack .dzip files, first off all make sure you've downloaded Gibbed Red tools. In this tutorial, we are going to unpack pack0.dzip file which contains all of the game files in itself. 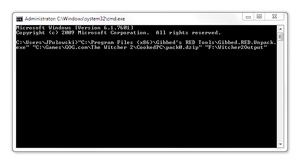 There are two types of textures:

DirectDraw Surface files usually contain 2D textures such as icons but also some of them contained in *.xbm files, the ones that contained *.xbm files contains model textures

You may find *.dds files at these locations: 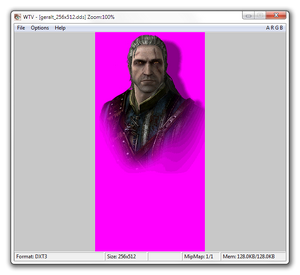 If you'd like to edit textures, you need to have an image editor such as GIMP or Adobe Photoshop with DDS plugin. (See requirements section.)

In order to view them, first they must be decoded using Red Tools.

In this tutorial, we are going to decode en0.w2strings file.

After you've opened the file, you will notice lots of texts. There are two types of text in strings files:

key — You may think it as an ID of the text.
text — Description, text, entry etc.

For instance, I want to find Geralt's character journal entries, then search using the keyword Geralt. Continue to search until you find these lines:

We can use this method for any character in the game. Now, let's examine these lines.

If we use the same method for second line, we'll find the line below which is the journal entry about Geralt of Rivia:

We may use this simple method to find in-game text.

This guide is a WIP and will be expanded very soon. If you have any questions about game files you may ask them on talk page.

Retrieved from "https://witcher.fandom.com/wiki/Extracting_The_Witcher_2_files?oldid=467322"
Community content is available under CC-BY-SA unless otherwise noted.