The Blood Curse
Assassins of Kings

This quest consists of obtaining the priest Chrest's medallion which Zyvik informs Geralt is now in King Henselt's possession, but Dethmold later explains that Henselt will only give up the medallion if the witcher can remove the burden of Sabrina's curse, which is to say, complete the quest The Blood Curse.

Nevertheless, once Geralt has lifted the curse, Henselt asks the witcher to deal with the problem of the recent regicides first, which means that Geralt must also complete the Chapter II portion of the quest Assassins of Kings. Only once that is done does Dethmold give Geralt the medallion.

Our hero was searching for items representing the virtues and horrors of war. They were necessary to lift the curse that forced the wraiths of soldiers, killed in battle between Kaedwen and Aedirn, to fight an eternal battle against each other and the living who strayed onto the haunted battlefield. Talking to Zyvik, Geralt learned that a priest, carrying a miraculous medallion, took part in the battle. This item protected the holy man from the rain of fire and, doubtlessly, had supernatural properties, which could have been the symbol of faith sought by the Witcher. The medallion now belonged to Henselt and Geralt decided to approach the issue diplomatically. He knew that if he angered the King he could kiss the medallion goodbye. The diplomatic way led through Dethmold.
Unfortunately, Dethmold was not willing to help the Witcher aquire the medallion. He thought Geralt would do his best to demonstrate his prowess by lifting the curse placed personally on Henselt. He was probably right - the sorceror understood that the grateful King would part with his amulet without grumbling.
The Witcher finally manage to lift the curse from the King. He almost got the medallion from Henselt when kingslayers appeared. The assassination attempt spoiled the capricious monarch's mood and the medallion was once more out of our hero's reach. While the would-be murderers were at large, the Witcher had no hope of acquiring it.
The Witcher persistently tracked the assassins of kings and did all he could in this case. He helped Henselt twice, so he earned the monarch's gratitude. The King finally gave up his medallion and Geralt acquired the symbol of faith. 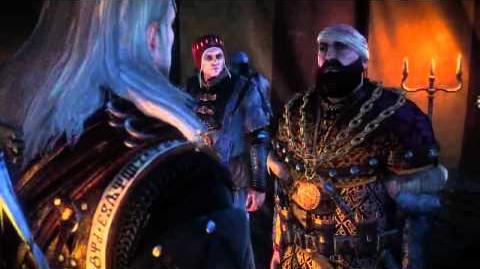