I regret to inform Your Grace that Your Grace's son fell while hunting a fiend. He died on the spot, along with his squire, his guide, the beaters, his peasant entourage and his hounds.
– Kavin Jell, manager of the Villepin Estate near Vizima.
Fiends are walking mountains of muscle capped with horned, tooth-filled heads. Like their rarer cousins, bumbakvetches, they live in thick forests, swamps and bogs. When possible they avoid humans, but when not possible, they kill them, and without much difficulty.
Their size alone makes fiends and bumbakvetches extremely dangerous – one blow from their powerful paws can kill a knight along with it's fully armored mount. Their enormous heft also makes them invulnerable to Aard: even witchers specializing in the power of Signs could not move one even an inch. Furthermore, any wounds they receive heal at lightning speed.
If that weren't trouble enough, fiends need not rely on their strength and stamina alone with fighting. They can also call on a more refined weapon: the third eye located in the center of their forehead, which they use to draw their prey into a state of hypnosis. During these times their victim does not see anything beyond this single burning eye – the last thing they see before their death.
A fiend's only weakness is its fear of loud noises – bombs such as Samum or Devil's Puffball are thus quite effective when fighting this monster. Furthermore, a blade covered in relict oil can increase a witcher's chances of victory – or at least of walking away from the fight.

Consider a fiend as one would a chort: incredible speed, strength, and a single-minded desire to kill, only more ferocious, larger, and angrier. They fight very much the same, and can be taken advantage of in similar ways.

The fiend's third eye defines this monster as a force with which to be reckoned. It can lure victims into a state of hypnosis, where all they see is the third eye glowing in the darkness. Inexperienced hunters will die in the seconds that follow. Witchers know to follow that burning eye, and understand to use that to judge precisely when to evade.

A fiend attempting its hypnosis can be interrupted by signs, but not sword hits. A well timed samum bomb can permanently disable the fiend's third eye and prevent any use of hypnosis. Failing that, the hypnosis effect has a limited range; when it starts its charge-up for the move (crouched down and the ground slightly shaking) back off at least two rolls worth of distance and the effect should miss. The best way to avoid the third eye is to move behind or move to the side of the fiend because hypnosis only works if the witcher is in view of the third eye. Fiends are not particularly vulnerable to normal fire attacks, but pyromaniac and firestream of Igni is very effective, due to their burning effect or other burning effect bombs like the dancing star. Note that drinking an Enhanced Cat or Superior Cat potion grants full immunity to the third eye attack making it useless.

In terms of attack style, at longer range the fiend will sometimes paw the ground and then do a long range charge like a bull. Rolling out or well placed dodges or using quen to nullify it's damage are your options. At closer range it will attack with its claws and its horns in moderate-sized sweeping attacks; it isn't particularly good at countering someone hitting it on the rear side almost behind it.

What are Fiends and Chorts? The Witcher 3 Lore - Fiends Chorts 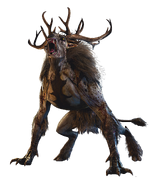