Given by King Ziggy

One on One: Flotsam
Fight Club is a fistfighting quest from Chapter I of The Witcher 2: Assassins of Kings.

The sidequest starts automatically after the quest One on One: Flotsam. After winning two fights King Ziggy appears to speak to Geralt suggesting that they meet outside, in front of the inn. From there he leads the witcher to commander Loredo's secret fight club behind his residence. There Geralt can fight some new, tougher opponents. Just before the final bout, Loredo tries to bribe Geralt to throw the fight.

Upon rejecting Loredo and winning the fight, the commandant makes a few ominous threats and has his guards escort Geralt to the gate. The witcher is then attacked by a couple of named thugs in the streets, who spout "Loredo sends his regards."

If you want to fulfill this quest you need to win all fights. Throwing the final fight results in a failed quest.

Defeating Zdenek nets you a reward of 200 orens from Ziggy along with a surprise attack from two thugs when you head towards the inn, while throwing the fight gets you 250 orens from Loredo. Throwing or losing the last fight also gets you an amusing scene with Dandelion. Finishing the quest also nets you 100 experience.

King Ziggy, a man of noble birth who was surrounding himself with men of despicable status, took note of Geralt's fist fighting successes. He offered him a chance to participate in another tournament. These were supposed to be fights for especially selected men. The participants' glory and reward would be guaranteed. Ziggy tended to appear in front of the inn at the evenings, and it was there that Geralt met him again.
King Ziggy took Geralt to Loredo's residence, making it was clear that the commander was the patron of fist fighting duels in Flotsam.
If Geralt backs out of the tournament:

Yet fist fighting in a damp cellar was not what witchers like most. Geralt pulled out of the tournament.

If Geralt loses during the tournament:

It turns out Flotsam bumpkins have fists of stone and Geralt lost shamefully. Thus his adventure with the tournament ended, but other fist fighting challenges would await him in the future.

So Geralt participated in the tournament under Loredo's enlightened patronage. The rules were simple - each contender would remain in the game until his first defeat. A hefty reward and a fondness of thrashing bumpkins meant the witcher did not hesitate.
The first opponent turned out to be a frail fist fighter called Twigs. In the old days he was known for his right hook, but his career was brutally ended during the duel with the Witcher. Our hero won and quickly prepared for the subsequent fight.
Matho entered the ring with a sure step. Self confidence is a must-have trait for a fist fighter but not sufficient alone to make a champion. Geralt defeated Matho with a skill compared to that of a young bear pulling honey from a hive. His opponent's blows were like the irritating buzzing of bees. However, the subsequent opponent looked more dangerous.
Once Smugface entered the ring, the audience cheered with enthusiasm. They fully expected to see a fist fighting piece of art. Instead of a ballet, the spectators got a heavy and brutal duel, which Geralt won, yet not without difficulties. The victory did not end the tournament, however.
If Geralt agrees to throw the fight:

Everything went smoothly until the final fight with a former champion from Vizima - a man called Zdenek. Loredo offered the Witcher money to throw the fight in order to make Zdenek a witcher vanquisher and enhance his career. Our hero agreed initially, curious to see what would happen, yet he did not know whether he could be sure he would remain faithful to his pledge.
And thus Geralt, seduced by the promise of financial gain, let Zdenek thrash him. The resulting bruises would adorn his torso for a while, though his mood was improved a bit by the bulging coin pouch he found in his satchel when he came to. At base, this job had differed little from regular witchers' work, for as usual, Geralt had risked his neck and taken a few knocks for a fistful of orens.

If Geralt refuses to throw the fight:

Everything went smoothly until the final fight with a former champion from Vizima - a man called Zdenek. Loredo offered the Witcher money to throw the fight in order to make Zdenek a witcher vanquisher and enhance his career. Our hero refused the offer, which was not so difficult to understand.
Ah, where are the erstwhile snows and ancient champions! The aura of greatness, which Zdenek exuded, burst like a soap bubble touching a porcupine once the fist fighter hit the floor. Geralt won, against Loredo's intentions, and was very happy with his victory. The commandant, however, ground his teeth in anger.

If Geralt agreed to throw the fight, but won instead:

Geralt knocked Zdenek down and out. Loredo, on the other hand, destested losing perhaps more than anything else. With the final bout behind him, the witcher collected his reward and heard out the commandant's threat. Though the tournament was over, Loredo's ire hung over Geralt like an executioner's axe. And like said axe, it would ultimately come down on the witcher.

Whether anyone liked it or not, Geralt became the fist fighting champion of Flotsam. Other challenges would await him in the future, but the victory over Loredo was the sweetest. 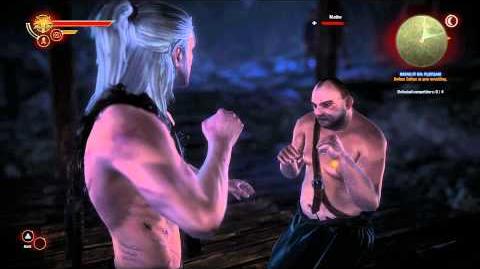