House Feleaorn of the White Ships

The Last Wish
Time of Contempt

Filavandrel aén Fidháil of the Silver Towers was a proud elf who lived in the Blue Mountains near Lower Posada.

Early life and exile into the mountains

Filavandrel was born in the influential elven family called Feleaorns of the White Ships. When Aedirn conquered Dol Blathanna he was forced to escape into the mountains, where he became the leader of Free Elves.

Unlike humans, elves didn't know agriculture, having found ways to have the land give them what they wanted before humans arrived. After humans took over though, the land changed and the elves could no longer get what they could from the lands and began to starve. Desperate for food, Filavandrel enlisted Torque's help in Lower Posada to steal food, seeds, and farming techniques from the bountiful village in hopes the elves could learn to farm in the mountains. However, one day he went to collect as usual when he and his band found that Torque was being chased by the witcher Geralt due to the sylvan's pranks irritating the villagers. Catching him by surprise, the elves captured the witcher and Dandelion. Geralt shared a few terse words with the proud elf, revealing Filavandrel was indeed too proud to cohabit with humans, even if it meant his group should starve and die in the mountains.

Seeing that there was no more point in conversing, Filavandrel ordered that Geralt and Dandelion be executed so to protect their deal with Torque but before it could be carried out the Queen of the Fields appeared, a revered figure among the elves. After communicating with the elves via telepathy, Filavandrel released Geralt and Dandelion before relenting and telling Geralt he was right but one day they'd make one last show of what the elves were made of, even if it meant their deaths, before leaving.

Sometime later, in 1267, he visited Francesca Findabair after she'd just been made queen of Dol Blathanna by Emperor Emhyr. At first he was upset they didn't get more land out of the deal, but after relenting that they barely had enough forces to protect the current borders of the valley, he proclaimed they should call their kind home and stop fighting like common bandits. However, Francesca revealed as part of the deal that made her queen, she was force to renounce the Scoia'tael and not offer them any aid as the emperor wanted the guerilla force to continue creating chaos for the Northern Kingdoms, leaving them to be killed off by the other kingdoms. She then asked for his forgiveness and while Filavandrel did forgive her, he stated he didn't know if the rest would.

Filavandrel is a leader in the Homecoming version.

Scroll 1: Filavandrel nearly always insisted that he be addressed by his full name – Filavandrel aén Fidháil of the Silver Towers and House of Feleaorn of the White Ships. Perhaps his insistance says more about him that the list of titles itself.
Scroll 2: Unlike most elves, Filavandrel never experienced life under human yoke. He never endured the humiliation of descrimination nor the fear of pogroms. He bore the proud expression of one who was never beaten down nor forced to bend knee.
Scroll 3: Filavandrel did not fit the image of a stalwart warrior. He wore flowing robes and paid great attention to his appearance. And yet, sword in hand, he proved more dangerous than a raging fiend.
Scroll 4: Filavandrel served as the the closest advisor and confidant to Francesca Findabair. He had great respect for the Queen of Dol Blathanna. She was the only individual with whom he was carefult to never put on airs.
Chest 1: When the kingdom of elves fell to ruin, Filavandrel found refuge in the Blue Mountains, at the edge of the world, far from human settlements. There, surrounded with rubble and mountain pine, he longed for the day he could return to his beloved Valley of Flowers... And the luxuries with which it overflowed.
Chest 2: The White Ships – words belonging to one of Filavandrel's many titles – are a reference to the vessels on which the elves first arrived to the Continent. Yes, yes... The noble Aen Seidhe were not this world's first inhabitants. A fact they are reluctant to admit... Likely because the cruelty they inflicted upon the land's indigenous races bears a striking resemblance to humans' callous treatment of elves several hundred years later.
Chest 3: Filavandrel has many reasons to be proud. Among them is the fact that he once belonged to a small group who managed to best the legendary Geralt of Rivia in battle. He stood poised to kill the witcher, but his hand was stayed by the sudden appearance of Dana Méadbh, an elven goddess who abhors bloodshed. Had she not intervened, the fate of the world might have turned out rather differently... 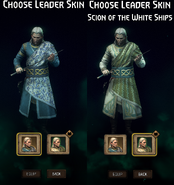 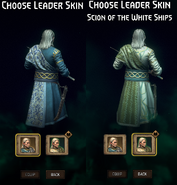