Witcher Wiki
Register
Don't have an account?
Sign In
Advertisement
in: Creatures, The Witcher 2 bestiary, The Witcher 2 Chapter II,
and 2 more
English

Elemental stone
Amethyst dust
Diamond dust
Red meteorite ore
Yellow meteorite ore
Blue meteorite ore
Elemental trophy
There is a hit detection issue during combat with this type of golem, sometimes allowing it to cause damage even when it appears to miss.

Sorcerers proficient in the Art can create gateways to dimensions ruled by the four elements and force the creatures dwelling there to serve them. Herbert Stammelford, one of the members of the first Conclave, had a d'ao, a genie of earth, at his beck and call. At the mage's command it moved a mountain that blocked the view from a window. Contemporary sorcerers are but a pale shadow of the old masters, but they still can do a lot. The most proficient among them can summon fire elementals, perfectly obedient guardians and defenders.
A fire elemental, similarly to post-conjunction creatures, comes from another reality, and our world is alien to it. According to philosophers, it does not have emotions and does not think the way even trolls and other familiar creatures do. Totally controlled by magic, it obediently carries the sorcerer's orders out. If its master is a passionate smoker, the elemental will provide fire to light the pipe, and if he is threatened, the elemental will incinerate his enemies.
Fire is not the elemental's sole weapon. If you were ever hit by a flaming bough, you might have a notion what it's like to fight this monster. Witchers rarely deal with them, but they know that the igni sign is useless, unlike the strong style. The elemental's riposte's are truly lethal, thus one should not expose oneself too much. Still, one must keep in mind the possibility of many surprises involving flames. In truth, it is best to politely ask the sorcerer to call his pet off.
Setting a fire elemental aflame is never a wise idea, so one can forget the igni sign when fighting this being. The creature is also immune to poisons and bleeding. The elemental has no weaknesses, but most of the means available in the witchers' arsenal can be used against it to good effect.

The first fire elemental was created by Ransant Alvaro. Sadly, flames engulfed his entire laboratory, burning it - along with every other building on his block - to ash.
– Tarvix Sandoval, "Origins of Magic Arcana"
Fire is the most destructive of the elements, thus the aggressive lethality of the creature that embodies its essence should come as no surprise. Fire elementals are forged in complicated magic rituals for one purpose: destruction. And they pursue this with murderous determination.
This elemental attacks using fireballs and streams of flame which reduce anything in their path to ashes in the blink of an eye. Like golems and other elementals, poison does not touch it nor does it bleed. Fire-based spells not only do no harm but in fact strengthen it - thus one should by no means think of striking it with Igni. Though vulnerable to silver blades, getting within sword's reach of one is dangerous due to the furnace-like heart they emanate. When fighting a fire elemental one should thus strike from a distance, using frost-spewing and dimeritium bombs, for they will do it the most damage.

Fire elementals can use similar abilities to an earth elemental, with the key difference that fire enhances and empowers them. Being harmed by a fire elemental has effects beyond the immediate harm sustained, since they can light clothes and armor on fire. Simply drawing close to a fire elemental is dangerous, due to the intense heat they constantly generate.The flames can be temporarily extinguished by Aard.

Avoid Igni at all costs, this only empowers a fire elemental and re-ignites its flames. Northern Wind bombs are highly effective, freezing the elemental in place. Dimeritium Bombs can prevent it from using certain attacks. Use heavy attacks to speed along the destruction of the elemental. 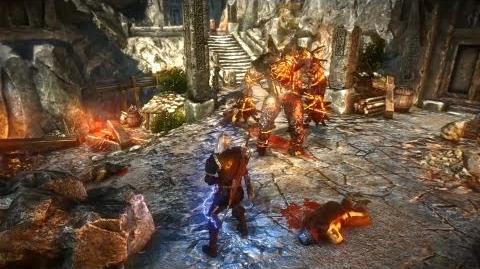 Fire elemental of Vergen (the Witcher 2)