Fisher King (lover of Lady of the Lake)

Lady of the Lake (lover)

The Witcher
Blood and Wine expansion
The Fisher King and his druid friend were followers and servants of the powerful nymph known as the Lady of the Lake.

In 1270, the Fisher King lived in a modest hut on the lakeshore outside Murky Waters, serving the Lady of the Lake, and according to the hermit, helped take care of the village. He also seemed to be the postmaster for the village and handled the delivery of a letter from Geralt to his lover to Vizima. The Lady herself suggested that he was her lover, on at least one occasion.

At his hut, Geralt found him to ask about borrowing his boat to get to Black Tern Island. His mostly silent nature thankfully didn't pose a problem, and he relented.[1]

In 1275, the Fisher King and the hermit followed the Lady of the Lake to Lac Célavy in Toussaint. He most likely transported common, but worthy folks on the island to the Lady's islet, and collected herbs.[2]

He was not a very talkative guy, and managed to communicate mostly with a series of Mhm's and Uhm's, except for when motivated to talk. 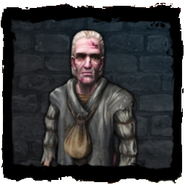 In the Blood and Wine expansion