King of Temeria
Prince of Sodden
Sovereign of Pontaria and Mahakam
Suzerain of Ellander
Senior protector of Brugge, Angren and Riverdell

Foltest was the king of Temeria, prince of Sodden, sovereign of Pontaria and Mahakam as well as the senior protector of Brugge and Ellander. He was the son of King Medell and Queen Sancia of Sodden, making him a member of the Temerian Dynasty.

Sancia's royal connection with Sodden turned the principality into a vassal state and Ekkehard began paying tribute to Temeria after the death of Gutram. The king's Royal Council included the sorceresses Triss Merigold and Keira Metz, as well as Fercart of Cidaris, Willemer the priest, Bronibor and Hereward of Ellander.

Foltest was a wise and handsome monarch. As with his predecessor, he was not fond of his grandfather, Hugo of Rivia. Upon his accession to the Temerian throne, he demanded that Hugo's portrait be removed from the throne room and had a habit of "leaving Hugo out" of the family genealogy. Foltest devoted plenty of time to lauding his great-grandfather, Griffin, as he was known to speak warmly of "Grandmama Bienvenu" and "Great-grandmama Clarissa". He tended to be highly evasive of any questions regarding family lineage.

Although unmarried, many rumors about Foltest's romantic status circulated. From an early age, the then-prince created great scandal in the royal court by having an affair with his own sister, Adda. After ascending to the throne, he was to marry Adda and make her his queen, mortally offending King Vizimir II of Redania, who had arranged for Foltest to marry his daughter Dalimira. Adda died soon after the birth of their daughter, however, and the marriage never eventuated. The cursed child — possibly accursed by the courtier Ostrit, who was in love with Adda, but perhaps by Foltest's mother — died shortly after birth, or appeared to, until she emerged as a striga seven years later. The monster was so dangerous that Foltest was forced to move his residence elsewhere. The beast, however, remained a threat to all citizens living nearby. Foltest and his advisors at summoned a multitude of magical professionals or Knowing Ones. While most only offered a multitude of ways to kill the monster, one told of a possible ritual which could reverse the curse: sleeping within the Striga's sarcophagus till the third crowing of the cock. As no one at the time could succeed, Foltest kept the Striga alive while arbitrarily sending for mages and sorceress who might know how to reverse the spell.

One day, the witcher Geralt of Rivia was taken before Foltest as he believed he could lift the curse on Adda. They discussed the contract and arranged a reward of 3,000 orens. Though they considered other options that Geralt could take, such as killing the striga, Foltest pleaded that Geralt simply cure it.

Later Foltest went and visited Geralt, discussing three last matters: what process the witcher would go through to lift the curse, what he should do if he needs to defend his life, and what state Adda would be in if she survived. Geralt explained how he would lift the curse and then went on his way to Vizima and eventually succeeded.

The affair between Foltest and his sister rendered him ineligible as a royal bachelor because any potential union would be tainted by the scandal. However, Foltest did not remain celibate for long. During the Second Northern War, he was secretly in love with the Baroness La Valette. It is widely rumored that both the Baroness' younger children, son Boussy and daughter Anaïs, are not the children of the old baron La Valette, but the progeny of Foltest. Adda the White is officially regarded as the successor to the Temerian throne, but the girl is clearly impaired and disabled.

Foltest and King Demavend III of Aedirn joined forces to fight Nilfgaard in the second war, but Emperor Emhyr var Emreis was also prepared to fight and met their challenges blow for blow. Once the conflict came to a conclusion, he acted as one of the negotiators of the peace treaty of Cintra.

In the original game, we hear about the king far in advance of any actual meeting. There is talk in the streets which suggests that the monarch is "away", but his specific location is never indicated. King Foltest only arrives in Chapter V, in the midst of the raging conflict in the streets of Old Vizima between the Scoia'tael and the Order of the Flaming Rose.

Prior to this point, he was away and had left others to govern in his stead: Velerad for instance, and, as we find out later, Thaler.

King Foltest is the ruler of Temeria. He inspires both fear and respect in his subjects. Foltest rules with an iron fist; he is decisive and hot-headed. Under his rule Temeria has become the most powerful of the Northern Kingdoms.
The king left the city. Theoretically, Burgomeister Velerad is to rule in his stead. In practice, the decisions come from an entirely different source, which causes chaos in the city.
Foltest returned to Vizima and began restoring order right away. He decided to put an end to the chaos and punish the culprits. It turned out that the king had a job for me, and my deeds influenced his plan.
If Geralt kills the striga:

I spoke to Foltest about his daughter's death. It was a difficult conversation. If this stern man had one weakness, it was Adda.

If Geralt lifts the curse:

I spoke to Foltest about freeing his daughter from the curse. Adda is the apple of her father's eye, so I definitely lifted his spirits, though the stern ruler showed no emotion.

Having survived one assassination attempt at the hand of a mysterious killer thanks to the timely intervention of Geralt of Rivia, the king keeps Geralt nearby as he regards Geralt as a sort of "good luck charm". At the start of the game, Foltest is leading a civil war against the Baroness La Valette to claim his bastard children. He is eventually assassinated by the Kingslayer and Geralt is accused of the crime. One of Foltest's most trusted agents, Vernon Roche, assists Geralt in finding the Kingslayer. Leaving no lawful heirs, Foltest's assassination plunged Temeria into the chaos of interregnum. The threat of a full-blown civil war between the nobility and the last remaining bastard child and her supporters.

In the game, Foltest has changed significantly, his clothes and face are completely different and is mostly focused on the design and art of the character - he appears more regal, colorful and distinctive. He only briefly appears (relative to the story) in the tutorial missions as flashbacks when recalling the events to Roche.

In retrospect, His Royal Majesty King Foltest was certainly an exceptional persona when compared to the other crowned heads of the time. This King of Temeria, Prince of Sodden, Sovereign of Pontar and Mahakam, and Senior Protector of Brugge, Angren, Riverdell and Ellander was a firm and decisive ruler - as, I suppose, one should expect from someone so abundantly titled. He was the kind of man who, when hit, made a sound suggesting he was forged of steel and not molded of bird dung. Being unmarried, he led a rather casual private life. In his youth, while still a prince, Foltest strove to demonstrate what he was capable of, and he proved capable of much. The love affair he had with his own sister, by whom he fathered his eldest daughter Adda, is widely known, as is his later affection for Baroness Mary Louisa La Valette. Both relationships bore heavy consequences, so to speak, and in both instances Geralt found himself stuck in the middle of the resulting mess.
Foltest most certainly still harbored feelings for his former lover and decided to save the children that were the fruit of this affair. He feared they would otherwise become trump cards in the game of politics, tools of intrigue. Once Foltest made a decision, no one and nothing could stand in his way.
The deaths of the great and powerful of this world do not always befit their lives. The blow was so unexpected that even the witcher failed to react in time. A dagger's blade ran across the throat of Foltest, ruler of Temeria, cleanly slitting it, and his blood flowed out onto the floor of the temple solar. Thus died one of the most powerful kings of the North - at the hands of an assassin in the garb of a monk. 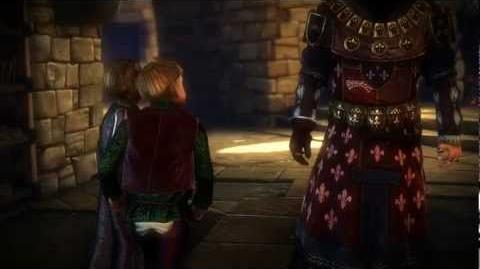 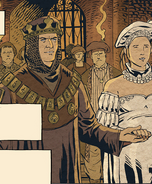 In The Witcher: Curse of Crows. 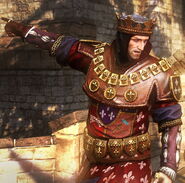 In the second game.

Foltest in the final The Witcher cinematic. 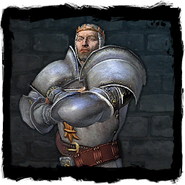 Foltest in the Geralt graphic novel.

Foltest played by Edward Żentara.
Add a photo to this gallery

Retrieved from "https://witcher.fandom.com/wiki/Foltest?oldid=523346"
Community content is available under CC-BY-SA unless otherwise noted.