Hope Burns Bright
The Flame that Cleanses
Under a Fiery Sky

q4004_elves
Free Elves is the final quest in Chapter IV. It is triggered after Geralt receives Aerondight from the Lady of the Lake and sets up his first encounter with White Rayla.

This quest is Geralt's final chance to side with the Scoia'tael, the Order or go his own way and choose the Witcher / neutral path. After conquering Dagon on Black Tern Island and receiving Aerondight, the witcher heads back to the mainland. Upon reaching the landing, he is met first by Alvin and then by White Rayla. With Alvin, Geralt gets a chance to impart one last piece of advice.

White Rayla has led a group of knights and scouts from the Order to Murky Waters in her hunt for the elven refugees. She warns the witcher that there will be dire consequences if he has decided to side with the elves, but gives him a chance to speak with them to convince them of the futility of their stand. Having warned him, she assures Geralt that she will hold her men off until he returns with his findings.

Geralt then heads to the village.

On the way he meets an Order footman, White Rayla's adjutant, who tells the witcher that the Order does not trust Rayla as they do the witcher. He asks Geralt to side with the Order to prevent a massacre like the one in the Outskirts which was brought on by ravenous beasts, monsters.

Just outside the village, he meets Dandelion who fills in a few more details of the hostage-taking situation in the village. He tells the witcher that Alvin is among the hostages. They discuss things a bit more and decide to both go into town: the witcher to speak with Toruviel and Dandelion to hide and watch from a safe distance.

In town, Geralt first encounters a Scoia'tael commando who fills him in on that faction's stance.

Dandelion then says he will wait for Geralt to tell him what to do.

Dandelion then insists that the witcher not make any decisions before speaking to him.

Geralt then speaks with Alvin who is obviously frightened and grappling with his ability to hear the thoughts of the people around him - not very nice thoughts at all. The witcher tries to explain things to the boy and this provides some small measure of reassurance.

Finally, Geralt gets a chance to speak with Toruviel who emerges from one of the huts. The latter explains that she can not release any of the hostages as the Order is merciless and such a move would give them the opening they need to come in and massacre the elves. Our hero insists on taking Alvin with him and Toruviel relents (or not, again, earlier choices). The witcher then goes to discuss the situation with Dandelion, whom Toruviel has already discerned in the shadows. She points out that this is a very good way for the bard (or "that singer") to get shot and that he is fooling no one.

Our hero and the bard confer and Geralt makes his decision.

Dandelion agrees to find the Fisher King to secure transport back to Vizima and wait for the witcher at the landing.

Dandelion agrees to find the Fisher King to secure transport back to Vizima and wait for the witcher at the landing.

Geralt is about to leave the village with Alvin when the Order ambushes the elves, contrary to what White Rayla had assured:

The witcher sees the injustice and leaps to the defense of his allies. The Order attacks and Geralt must kill them in order to be able to get out of the village.

The witcher helps the Order kill the elves to prevent a second massacre like the one in the Outskirts and be able to leave the village.

The elves interpret the witcher's presence as collusion with the Order. Both sides fight each other and are also hostile to the Witcher if he is near them (and he may stay to kill everyone).

In the frenzy, Alvin is left cowering, alone, and it is not long before his self-preservation instincts kick in. Much to the exasperation of our hero, the child teleports himself out of danger, but where to? There is no time to do anything as the battle is raging around him, and what could he do anyway? Geralt has no idea where Alvin could have gone and no way to find out. Ever pragmatic, the witcher "finishes things" in the village and finding nothing of importance in the aftermath of the battle, makes his way to the landing to find Dandelion.

On the way, he encounters Rayla again and demands to know what just happened. She explains that it was none of her doing. Her men mutinied, her own adjudant producing a letter from Siegfried himself stripping her of her command.

Rayla knows that Geralt sided with the elves and is none too happy about it. She tells him he has made an enemy.

Geralt tells Rayla that she should get out of there.

Geralt tells Rayla that he and Dandelion are headed to Vizima, but there is no room for the likes of her on board.

Geralt finally finds Dandelion and they head back to Vizima courtesy of the Fisher King and his boat. End of Chapter IV and end of quest.

The players in this scenario[] 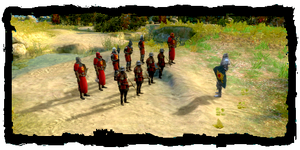 Rayla and the knights of the Order were chasing a group of Scoia'tael and ended up here. It appears that the fugitives and the local elves have taken some hostages in the village. I must speak with Toruviel. Can I trust Rayla? She promised to hold the soldiers back for now. I must go to the village and speak with Toruviel.

Dandelion is right. I refuse to get involved. I'll grab Alvin and we'll flee to Vizima. I agreed to meet the poet at Fisher King's hut. I refuse to meddle in this conflict. I'm leaving. (3000 XP)

I made my choice and sealed it in blood - the blood of all who chose to oppose me. There is no going back now... The fight is over. I need to grab Dandelion and leave this place. 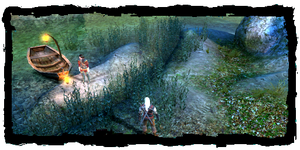 It appears that Rayla did not go back on her word. Based on a secret order, the adjutant has stripped her of her command. Let's assume I believe her. I must sail to Vizima now. 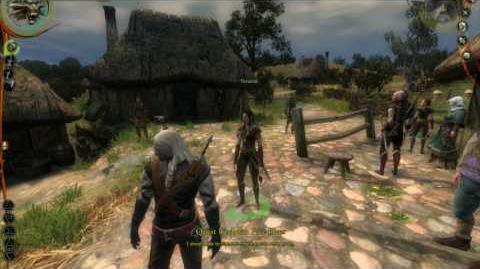