Witcher Wiki
Register
Don't have an account?
Sign In
Advertisement
in: Creatures, The Witcher bestiary, The Witcher Prologue
English

The frightener or chimera[1] is a desert dwelling monster. It is nearly invincible, especially when controlled by a mage. Even witchers prefer to avoid fighting this beast if they can. Fortunately, this overgrown insect is sensitive to loud noises which deafen it and render it defenceless.

The first frightener was created by the mage Dagobert Sulla. After creating the beast, he is said to have exclaimed "What have I done?" and promptly destroyed it.

It is also mentioned in the same breath as giant scorpions, scarletias, wights, lamias and crab spiders.

Frighteners are very rare; they come into being as a result of magical experiments; to create a frightener, a mage has to possess great power and a basic knowledge of mutation

Frighteners are immune to almost all effects

Sensitive to steel and silver; very sensitive to loud sounds at high frequencies

In combat, frighteners rely on their size and strength; they try to knock their opponents down and then deal a lethal blow

"The first mage to create a frightener was the infamous renegade Dagobert Sulla, a diligent student of the Zerrikanian masters of alchemy and the supervisor of the Trial of the Grasses carried out at Kaer Morhen. Upon beholding the abomination he had created, Sulla is said to have cried: 'What have I done?' He destroyed the monster; his notes, however, survived."

Developer CD PROJEKT RED's characterization of the frightener taken from the monsterbook, which was enclosed with the Collectors Edition of The Witcher​ for Poland, Hungary and the Czech Republic:

Sapkowski never described the frightener in detail, but does mention its name. And what a name it is! A monster called "frightbringer" certainly should not disappoint players.
The prototype of the creature was the praying mantis, a voracious insect famous for its cannibalism. The creature depicted in the black-and-white sketch was modeled after this arthropod. The colored sketch presents an array of colors — a common feature of dangerous and venomous creatures. Like the original insect, the frightener has a pair of highly developed forelegs — formidable weapons when it attacks the witchers of Kaer Morhen.
Based on that first sketch, we created a model that we used briefly in the game. Yet, as the game evolved, the concept of the frightener changed as well. We needed a more massive, armored creature covered with earth-toned textures matching the grey walls of Kaer Morhen, where the frightener spreads destruction. In the second sketch the monster's torso resembles that of a beetle. The beast has also acquired wings that were not there earlier in spite of its mantis origins. Animations involving the wings appear in cut scenes and during combat with the creature. Also drawn from the beetle are its thick, armored legs and the "fangs" that encircle its head. The mantis-like forelegs and head survived as they merged smoothly with the other changes. Lastly, the frightener was given a new, final texture in shades of green. In this form it is ready to attack Kaer Morhen... and to die from the witcher's blades.

Visenna leafed through page by page, paying him no heed.
"Interesting", she said after a moment. "Eleven years ago, when you were banished from the Circle, certain pages disappeared from the Forbidden Books. It is fortunate they have been discovered — and annotated in the meantime. Well, I am amazed you dared to use Alzur's Double Cross. I doubt you have forgotten how Alzur ended. They say some of his creations still roam the world, including his last: the viy that maimed Alzur himself, destroyed half of Maribor, and fled into the forests of Riverdell."
Something Ends, Something Begins 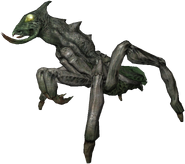 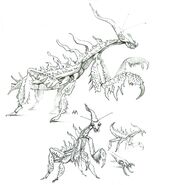 An early sketch of the frightener, modelled after the praying mantis 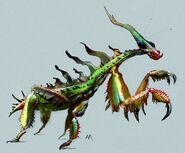 The first frightener was multi-colored

Rendered model of the frightener

The final drawing of the frightener the basis for the model

A frightener seen in the background.