View source
watch 02:46
The Quarry - The Loop
Do you like this video?
Play Sound
Sub-Pages:

The Witcher 3: Wild Hunt
Fringilla Vigo was a Nilfgaardian sorceress and a member of the Lodge of Sorceresses along with her fellow countrywoman, Assire var Anahid. She was also the second cousin of Anna Henrietta of Toussaint. She was a woman with natural grace, green eyes and close-cropped black hair. During the First Northern War Fringilla fought for Nilfgaard at the Battle of Sodden Hill where she blinded Yennefer who was fighting on the opposing side.

When Geralt and his team reached Toussaint, Fringilla embarked on a romantic relationship with Geralt and did everything in her power to keep him from leaving the castle. While the witcher did develop some feelings for her, he never quite was able to put Yennefer out of his mind, even going so far as to use Yennefer's name instead of Fringilla's in the throes of passion.

In Nilfgaard, Fringilla was approached by Assire var Anahid who offered her the chance to become a member of the Lodge of Sorceresses. While initially surprised by Assire's appearance, since Assire never really put effort into her appearance before, Assire pointed out that Fringilla had always been one to put effort into her own looks, noting that among Nilfgaardian mages Fringilla didn't care about their stereotypes (as Nilfgaard believed mages that focused on their looks were superficial). The two southern sorceresses then discussed events at Nilfgaard's court before preparing to meet the Lodge.

The two teleported to Montecalvo, where they met the other members of the Lodge. However, when a reluctant Yennefer appeared with Francesca and Ida, Yennefer immediately recognized Fringilla, as the two fought on opposite sides in the Battle of Sodden Hill. Using this to her advantage, Fringilla was able to talk to Yennefer alone during a break in the meeting and, knowing Yennefer was trying to escape to get to Ciri, gave her hints on how to get around Montecalvo's impenetrable barrier.

Imprisoned by Emperor Emhyr var Emreis himself, due to her treasonous connections with the Lodge, Fringilla was sought after by her former associates, along with Geralt, in their bid to defy and defeat the Wild Hunt near Undvik on Skellige Islands.

Emperor Emhyr had once presented the mages of Nilfgaard with a simple choice: either serve their country unquestioningly or die in prison.
Fringilla Vigo, a mistress of magic holding office in the vassal duchy of Toussaint, refused both options and instead joined the infamous Lodge of Sorceresses, whose aim was to stand up to the dictates of kings and emperors. These bold ambitions were never fulfilled, however, and Fringilla Vigo lived in fear that her ties to this subversive organization would be discovered and she would meet a quick end at the hands of the emperor's executioners.
One must mention here that Geralt first met Fringilla at the ducal palace in Beauclair many years ago, when we were there enjoying the hospitality of my one-time love, Duchess Anna Henrietta. The witcher, always a sucker for sorceresses, conjoined with Madame Vigo during this time in a quite lively relationship that surely was no cause of joy for Triss or Yennefer.
All indications were that Fringilla had been arrested and remained in a Nilfgaardian prison, undoubtedly awaiting execution for acts of high treason.
She was later released, however, thanks to a bargain Yennefer had struck with Emhyr. 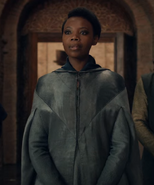