Gargoyles are animated stone statues infused with lava by mages.

In the Witcher 2, they are first encountered briefly in Chapter II (if on Roche's path), and later in Chapter III as part of The Gargoyle Contract.

They are vulnerable to Silver swords (especially Deithwen, which provides a 25% bonus), and will explode violently after being slain.

They can be stunned fairly easily using the Aard Sign. Killing a stunned gargoyle will prevent it from exploding.

In times long gone, when youth was more polite, everything was cheaper, and girls were more eager, sorcerers could breathe life into inanimate matter and create stone servants this way. Gargoyles - for I have them in mind - can be found in ancient cities to this day, but their magic has vanished and now they are nothing more than cornice decorations. There are, however, exceptions such as the Loc Muinne gargoyles - still enchanted and still dangerous.

Theoreticians of magic still argue about classifying gargoyles. I favor the school claiming they are a type of golem. For gargoyles are nothing more than fancy sculptures animated with magic and programmed to do simple tasks. They can complete only the most rudimentary works, so they are most often guarding a territory, even if their creator turned to dust long ago.

The gargoyle is a magical creature and often has surprising tricks at it's sleeve. Teleportation for example: an opponent makes a blow, and the gargoyle disappears only to emerge elsewhere at the same moment. Like behind it's enemy. It's even worse when the gargoyle appears over his opponent - then it just falls down and crushes it's victim beneath the weight of it's stone body. Thanks to their medallions, witchers can perceive disturbances in magical aura, so they see the point where the gargoyle will appear moments before it materializes, so they have time to react. However ordinary people tend to die crushed.

Fighting the gargoyle means fighting solid rock, so it should not be surprising that poisons are useless, as are fire and oils causing bleeding. Because of its great mass, the gargoyle's stone body cannot be unbalanced, let alone knocked down. Immobilizing one with a trap will fail, as gargoyles can teleport and will flee snares using this ability. They have no weaknesses at all. 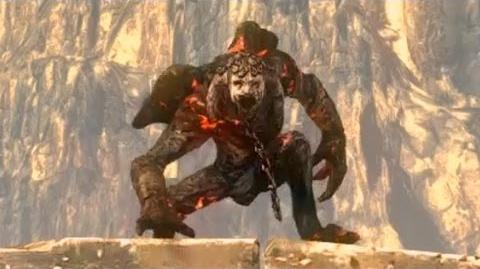 Gargoyles are stone statues brought to life by magic in order to guard mages’ laboratories and lairs from intruders. Their appearance alone has scared off more than one prospective burglar. Those who do not take fright at the sight of these horned and winged monstrosities usually die shortly thereafter, torn to shreds by stony claws.

Gargoyles are extremely dangerous opponents. Etched out of granite or marble, they are able to withstand tremendous amounts of damage and exhibit superhuman strength. One blow dealt from their boulder-like fists will crush even a man clad in heavy armor. Not even those out of reach of a gargoyle’s arms can feel safe, for they are able to through hunks of stone with deadly precision.

Due to gargoyles’ considerable size and weight, the Aard Sign does nothing against them. As beings made of stone, they feel no pain from fire, meaning the Igni Sign is worthless against them, as are weapons meant to cause bleeding or poisoning. It is a witcher’s good fortune that they also have a few weaknesses: they feel the sting of a silver blade and are hurt by Dimeritium Bombs, which disrupt the workings of the magic spell which gives them life.

A gargoyle is nearly as sturdy as any earth elemental, but significantly faster, more versatile, and seemingly more intelligent. Aard and Igni are almost entirely useless.

Gargoyle melee attacks may not have the same reach, but they cannot be parried. Evade them.

Yrden can slow a gargoyle down, making it easy to evade their melee attacks, and allow a witcher to strike back.

Do not linger in front of the gargoyle for long. They can counter overly aggressive witchers by using their poisonous breath.

The safety of range is fleeting versus a gargoyle. They can not only throw rocks with a great degree of accuracy and power, but they can leap into the air and crash down atop or next to a witcher with terrifying speed. Both attacks serve to harm and stun victims.

A gargoyle can also stomp the ground with such force that they can stun and partially blind nearby threats.

Dimeritium Bombs can weaken the defenses of a gargoyle, but they do little to blunt their offense. Stay focused on limiting the damage

Retrieved from "https://witcher.fandom.com/wiki/Gargoyle?oldid=152482"
Community content is available under CC-BY-SA unless otherwise noted.