Edit
watch 11:11
Who is Ge'els: 'Witcher' Character Lore
Do you like this video?
Play Sound

Ge'els was an elf of the Aen Elle, a member of the Dearg Ruadhri and one of Eredin's most trusted lieutenants together with Imlerith and Caranthir. His headquarters was the Palace of Awakening, located in Tir ná Lia.

Unlike the other lieutenants, Ge'els did not actively participate in the hunt. Instead, he was assigned to rule the Aen Elle world in Eredin's stead while the king was leading the Red Riders. While he had great skill in plotting and politics, he was also righteous.

In 1272, in order to weaken Eredin, Avallac'h and Geralt travelled to Tir ná Lia in order to find Ge'els and convince him to break his support from Eredin, by revealing that Eredin murdered King Auberon, whom Ge'els admired.

When they finally arrived, they found Ge'els painting a portrait in his garden of an elven woman. Rather than calling the guards, he heard what Geralt and Avallac'h had to say, and agreed to return with them back to Novigrad. When they arrived, they had Corinne Tilly use her power of oneiromancy to reveal Eredin's treachery. Once the dream ended, Ge'els advised them to fight Eredin in their own world, and to lure him there using the Sunstone on Skellige. He promised that Eredin would not receive reinforcements, should the king call for them, and Avallac'h assisted Ge'els to return to Tir ná Lia.

Intelligent, composed and endowed with massive charisma, Ge'els enjoyed the respect and trust of the inhabitants of the Aen Elle world as well as that of their previous ruler, Auberon Muircetach.
For this reason Ge'els not only retained his high-ranking position after Eredin took power, but also became one of the new king's most powerful allies, acting as his viceroy while Eredin traveled at the head of the Wild Hunt.
Though Ge'els was one of the most influential of the Aen Elle, power had never been among his driving aims. According to Avallac'h, his loyalty and sense of right and wrong constituted a weakness that could be used - possibly to tip the scales of the final battle.
As predicted, Ge'els acted out of loyalty to his former king and withdrew support for Eredin once he learned the truth about Auberon's death. This momentous act portended important ramifications for the outcome of the coming battle. 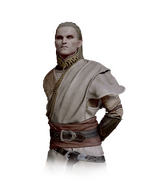 full in game render (by Tokami) 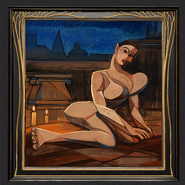