Witcher Wiki
Register
Don't have an account?
Sign In
Advertisement
in: Dwarves, The Witcher characters, The Witcher Chapter II,
and 3 more
English

The Witcher
The Witcher 3: Wild Hunt (mentioned)
Golan Vivaldi is a dwarf, and part of the "Vivaldi family", a well known family of dwarven financiers and bankers. One of their banks is located in the nearby Trade Quarter, but it is now being run by new human owners after a hostile takeover.

Vivaldi is very touchy about his race and has always had a fierce hatred of humans. The takeover, and resulting bankruptcy, combined with his racial views, easily explains the conditions in which Geralt finds him, namely bitter and living in squalor in the nonhuman district of the Temple Quarter. He is right next door to Kalkstein, in fact.

Actually, in one possible scenario, Vivaldi is being arrested by City Guards at his home when Geralt first finds him. Geralt must then bail him out of jail in order to speak with him.

He knows Yaevinn and has had dealings, of a purely financial nature of course, with the Scoia'tael. Despite his suffering at the hands of humans, Vivaldi will not help the Scoia'tael during the Worth its Weight in Gold quest, and would not, even if he still had control of his bank and fortune. Yaevinn, however, will disregard Vivaldi's negative attitude to his cause, and will try to get access to the bank's vaults by tricking Geralt into clearing an underground passage into the bank in Echoes of Yesterday and the subsequent bank heist, Gold Rush.

Golan Vivaldi is a dwarf who's very touchy about his race. The Vivaldis are financiers and one of their banks is located in Vizima's Trade Quarter.
The money for the Professor's bail came from Vivaldi's bank. That's how the criminal walked free.
Vivaldi lost control of the family business. There was a hostile takeover and the bank is now controlled by human owners. That explains the dwarf's bitterness as well as his poverty.
I unfairly suspected Vivaldi of financing Salamandra. The evidence indicates he is innocent.
The dwarf hates humans. Apparently, in doing business with them, he's had a chance to see them at their worst.
Vivaldi has relations with nonhumans, including the persecuted Scoia'tael. 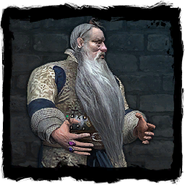