Able to take shape of any living being

A golden dragon (Scholar: Draconis Aurum nobilis)[1] is a legendary creature considered by most of the experts as myth. It is uncertain whether they form a separate race or are just rare, sterile mutations among more common variants.[2]

The legends attribute them several miraculous attributes, of which unquestionably are their magical abilities and changing their forms into any living being. They belch destructive fire and hot steam. The largest specimens reach 20 meters in length.[3] 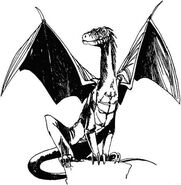