Frustrating jobs happen in every profession. Golem contracts are just such a job for witchers, as they involve slashing through solid rock animated by magic. Luckily, what is brought to life by a lightning bolt can very well be destroyed by one. This is something we all truly wish the golem, from the very bottom of our hearts.

In the game, Geralt finds an old golem cemetery in the swamp with four or five of the beasts "frozen" in place. As it happens, he must re-animate and then kill one of them to complete the main quest in Chapter II.

"Once an absent-minded mage created a golem, animated it by casting Alzur's Thunder, and ordered his new servant to fetch water, before burying himself in his scholarly books. The golem kept carrying water day and night, without pause, and ultimately flooded not only the mage's house, but the whole city. As you can see, my young students of the Art, improper use of tools and a lack of elementary training may cause a tragedy.

Anabelle Radfind, Lectures on Security and Hygiene in Magic"

Developer CD Projekt's characterization of the golem taken from the monsterbook, which was enclosed with the Collectors Edition of the computer game The Witcher for Poland, Hungary, the Czech Republic and Slovakia:

The golem is often portrayed as a clumsy, faceless figure made of clay or as a perfect effigy of a man. Neither of these ideas was suitable to the world of The Witcher. Ultimately, our golem became a piece of roughly hewn rock animated by a magical obsidian heart placed inside the beast's chest by its maker. The mage who created it was no sculptor; he cared little for aesthetics and focused on functionality. This creature was meant to work and defend its master's property. And the golem performs these tasks (especially the latter) perfectly, with ruthless efficiency.

The hero encounters the golem in the swamp forest, near the Golem Burial Ground. The creatures stands still, frozen in mid-step, having expended all the power which animated it. Geralt's task is to bring the creature to life, which he does by summoning a storm with the help of friendly druids. We obviously drew the concept of a thunderbolt giving life to inanimate matter from the story of Doctor Frankenstein's monster. Having Geralt yell "It's alive!" was too tempting to pass up. The golem is thus inspired both by the legend of a rabbi from Prague who created an artificial human being and by Mary Shelley's novel. This combination fits our world of grim and gritty fantasy. 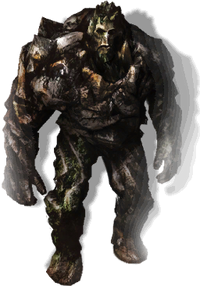 There are two types of golem in The Witcher 2: Assassins of Kings referred to in the journal as Earth elemental and Fire elemental.

There is also a sentient Talking Golem in Dearhenna's laboratory beneath Loc Muinne.

Template:Infoboxbestiary2 “If want us to break through this wall, we’re gonna need twenty sappers, seven mules and a hundredweight of saltpeter. Or one golem.”—Vilmir Brass, foreman at Mount Carbon

Golems are mindless matter brought to life by a spell. They obey their creator’s orders without question. Their boundless strength, ability to withstand pain, endless patience and the fact that they need not one jot of food or drink makes them the best servants or guards anyone could ask for. Once provoked, they will not tire of battle until they have either crushed their opponent or themselves crumbled into dust.

Defeating a golem is extraordinarily difficult: for obvious reasons—it does not bleed, if feels no fear or mercy and it is invulnerable to fire and poison. What’s more, a golem’s body is as hard as the rock it is sometimes heft out of, so even a silver blade will barely wound it. The monster’s only weakness is acid—a blade covered in acrid oil can thus increase one’s chances for victory.

Golems use no weapons, for they have no need—their fists, weighing over a hundred pounds each, can crush solid granite with one hit. A blow from a golem should thus be avoided at all costs—there is no shield that can stop it, nor sword that can parry it. That is no easy task, for these creatures are able to move with surprising speed. Luckily, their enormous mass means they are not very agile—once a golem begins a charge, it cannot stop quickly, a fact experienced witchers use to their advantage.

Do not attempt to parry the punches delivered by a golem. The sheer weight and power behind them renders such thinking suicidal at best.

A charging golem cannot be easily stopped, but a clever witcher can use this to their advantage. Roll out of the golem’s path, then strike.

Yrden is useful when going toe-to-toe with a golem, but remember that the golem is merely slowed, not helpless. They can still fight despite Yrden’s effects, and can still interrupt a witcher’s swordplay with a single crushing blow.

As with the elementals, a golem can pound the ground with such ferocity, anyone standing near it is knocked prone.

Retrieved from "https://witcher.fandom.com/wiki/Golem?oldid=152484"
Community content is available under CC-BY-SA unless otherwise noted.