Edit
watch 10:10
'The Witcher' Lore: What is the Great Sun?
Do you like this video?
Play Sound

The inhabitants of the Northern Kingdoms know very little about the cult of the Great Sun. The head of this religion is a high priest, which may also be the Nilfgaardian Emperor.[2]

The cult of the Great Sun was formerly only one of various religions in the Empire, popular only in its core regions. This situation changed during reign of the predecessor of Emperor Fergus, about a hundred years ago, who initiated a series of major reforms. The ruler was looking for a symbol which would unite the realm better and more permanently than only the ruling dynasty. By skillfully managing with cash and giving priests his monarchic favor, he made the cult begin to gain a new crowd of followers throughout the whole Empire. In exchange, the Emperor demanded absolute support for his policies from the clergy, practically making priesthood another form of civil service.

Then the monarch issued a special decree called "March 8th Edict" which granted the cult the status of official state religion. Though during reign of the Usurper its rights were diminished, its position increased after Emhyr var Emreis and his army overthrew the usurper.

The cult has its roots in the Elven cult of nature. The primary deity is the Sun, giver of warmth and life, protector of humankind, but also capable of being cruel and destructive. Since the "March 8th Edict" it has also been the patron of the ruling dynasty. The most important holidays are the Equinoxes and birthday of the current Imperator, currently July 26. The central ceremonies are held in the capital, performed by the Imperator acting as the High Priest, head of the religion.

All holidays are celebrated with great pomp, to the accompaniment of solemn music and in the presence of all major officials, commanders, and aristocrats. After official ceremonies, folk games with food and beverage take place. It is noteworthy that a number of customs related with the holidays are derived directly from Elven tradition. Priests of the cult wear white raiments embroidered in gold and silver during devotions, celebrations, and holidays; as casual clothes they wear black civilian dress.

Lore supplies for 2nd Edition contain some further informations about the cult. Being a priest of the Great Sun is just another career path in the Empire. Finishing a theological college and passing the exams guarantees gaining an official title of "priest". Subsequently, depending on education, the fledgling priest can get to one of the minor temples or directly to the local Governor's bureau. Then everything depends on his involvement in fulfilling the duties... and his political sense.

Curiously, there is no persons with magic or psionic abilities among the Great Sun' priests - all adepts possessing such abilities are immediately directed to the Imperial Magical Academy in Loc Grim. 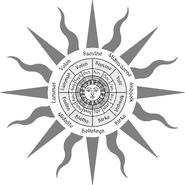 Cult of Great Sun is associated with the solar calendar