Mutants created through experiments with witchers' potions and formulae; they are super humans and perfect warriors who serve the Order of the Flaming Rose unquestionably in assault divisions

They feel neither fear nor pain; they are resistant to enchantment, including the Axii sign; they cannot be disarmed and are immune to knockdown and stun attempts

They can be injured with a steel weapon

They are slow but well armed and strong; they use weapons skillfully; their blow can stun

These mutated knights are clad in heavy armor and wield humongous shields, making them tough nuts to crack, even for a witcher. The only thing worse than a Greater Brother would be a monster that uses weapons with great skill and demonstrates mastery of complex combat tactics.

"With great pride and full responsibility I must state that the experiment was successful. The race of super humans we need more than meets our expectations and will satisfy Jacques de Aldersberg. Their combination of intelligence, endurance and brutal force tamed only by loyalty to the Flaming Rose is the future of the world."

Developer CD PROJEKT RED's characterization of the Greater Brother taken from the monsterbook, which was enclosed with the Collectors Edition of the computer game The Witcher for Poland, Hungary and the Czech Republic:

The hero encounters these mutated knights of the Flaming Rose toward the end of the game. The madman who subjected them to mutation dreamt of creating better, stronger, more resistant and obedient human beings. He fulfils his dream only in part, for his knights become something very near to monsters.


When Geralt spots these armored beasts alongside normal knights, he sees first hand the terrible effects of their mutation. To strip these monstrous and gloomy mutants of a measure of pathos, we jokingly christened them "Greater Brothers", a name that would ultimately remain with them.


The concept drawings present the beings' evolution. They are protected by heavy armor that only creatures with overdeveloped muscles and unnaturally strong bones could possibly wear. Wings are attached to the spiked spaulders, bringing to mind military banners and evoking the image of hussars, a type of light cavalry.


The armor they wear and the shields and maces they carry remind us that they were once knights of the Order. Obviously, the size of these devices has been adjusted to the monstrous scale of their bearers. Their allegiance to the Order of the Flaming Rose is indicated by the emblem on their chest, vivisible in the colored sketch. 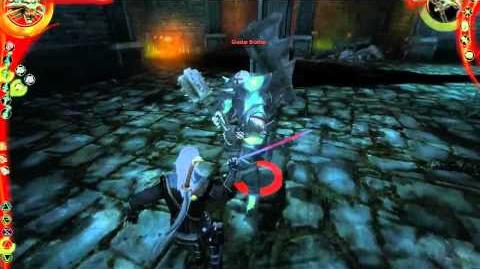 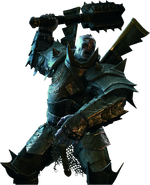 A mutated knight clad in armour that no human could wear.

A detailed sketch of the armoured mutant, the Flaming Rose emblem on his chest.

A Greater Brother with hussar wings. 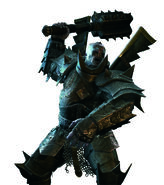 A Greater Brother striking his mace.