Edit
watch 07:36
'The Witcher' Lore - Monster Lore: Griffins
Do you like this video?
Play Sound

A griffin, also known as griffon or gryphon, is a creature with the body, legs, and tail of a lion and the head, wings, and talons of an eagle. They are known to toy with their prey, eating it alive, piece by piece.[1]

Inhabiting mainly caves in most of the mountains on the continent, griffins reproduce by laying eggs[2]. They have strong wings, and so have the capability to create a unblockable and powerful strike with their talons.[3]

The griffin looks like a combination of a ferocious cat and a giant bird. It usually inhabits primeval highlands and builds its nests on unreachable mountain summits. The griffin preys on large mammals and, being a highly territorial creature, fiercely defends its hunting grounds. When the first colonists appeared and trade routes expanded, griffins were known to attack settlers and merchants in defense of their territory. Griffins are tough opponents and their strength should not be underestimated. Obstinate and aggressive, they make deadly use of their ability to fly during combat, swooping down on their enemies, knocking them to the ground and ripping them to shreds with their claws and beak.[4]
The griffin is a hybrid, a cross between an enormous cat and a bird of prey. According to some researchers it is one of the creatures that arrived during the Conjunction, whereas others claim it is a native species that appeared in this world long before that event.[5]

Aye, half-eagle, half tomcat, just like on the lord's crest. 'Cept this 'un was carryin' me dead cow 'stead of a scepter.
– Griffin attack witness, name unknown
Griffins were once only found high in the mountains, where they would hunt marmots and wild goats. When humans encroached on their lands, however, griffins soon discovered a new source of much more plentiful and easier-caught prey: cows, sheep and shepherds. Though still wary of main roads and towns (where folk with the means to hire a witcher are like to dwell), these half-eagle, half-wildcat creatures have gone from rarities to oft-encountered pests known throughout the Northern Realms. Especially hated are the subspecies known as royal griffins and archgriffins.
Griffins mate for life and when their partner is attacked they will defend it to the death. For this reason they are often considered the embodiment of courage, loyalty and fighting spirit. This last attribute no one would deny them – when provoked, they will not cease their attack until they have torn their opponent to shreds.
Griffins find their victims using their extraordinary perceptive sense of smell. After drawing near to their chosen target they attack by swooping down from great height. Their muscular mass combined with their swift speed mean[sic] this blow alone is often enough to end the fight. If, however, the victim survives this aerial assault, the griffin will immediately engage it in direct combat, making use of its sharp, curved beak and powerful talons.
The wounds it deals are deep and cause powerful bleeding. Even worse, griffins do not have any true weaknesses – except for their vulnerability to hybrid oil and certain kinds of bombs.

Griffins will repeatedly swoop down from the sky in order to rake their target using their talons. Archgriffins can also spit corrosive acid, weakening armor. A crossbow or the Aard sign will force a griffin to the ground, making the fight more manageable. A silver sword should be used for ground combat.

Griffins use a high pitch roar that can knock its opponent off balance. They will leap at their target from a great distance, in order to tackle their prey. Attacks from a griffin will cause bleeding. The Quen sign, or a Swallow potion can be used to counter bleed effects.

It's best to keep a griffin within melee range so that it can't use its tackle ability. A griffin's tackle can be difficult to avoid, easily ending in death. Each swipe from the wing talons can be telegraphed by the wing being raised into the air. Try to attack the griffin from the side, to inflict damage where it's unprotected.

Explosive crossbow bolts work well against a grounded griffin, though this means staying out of melee range and allowing it the opportunity to use its tackle. A Northern Wind Bomb can be used to freeze the griffin in place. 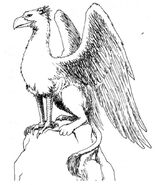