Guard Dog is a quest in the Side Effects premium module. 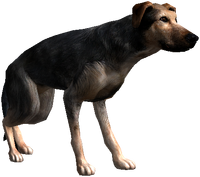 While strolling about the Temple Quarter stocking up on "conveniently available" items, Geralt comes upon a door which has a guard dog. There only way to get through that door is to make friends with the mutt, but it seems that no ordinary doggie snack will do to appease the beast so our hero is left to guess what a better treat might be.

As luck would have it, not one but two separate opportunities present themselves whereby the witcher can acquire just to treat for the canine: delicious pot roast. Said repast can be obtained either from Griffarin after winning the drinking contest, or from Everden, for finding a relic to add to his collection.

A juicy piece of pot roast — if that doesn't get the dog to abandon its post by the door I don't know what will. I think this house could contain some valuables. I must try to lure the dog away from the door using the pot roast.

I managed to get into the wealthy townsman's house. I should look around for some valuables.

I had to kill the dog to get into the house. Not my most justified kill, but I'm in now and I'm hoping this proves to be the home of some wealthy merchant. I had to find another way to get past the dog and into the wealthy merchant's house.

Retrieved from "https://witcher.fandom.com/wiki/Guard_Dog?oldid=463679"
Community content is available under CC-BY-SA unless otherwise noted.